I must be honest.  When I first moved to Fort Myers 17 years ago I didn't pay close attention to the high school distance running scene.  Outside of Estero's Bona Jones, a Footlocker finalists, there just wasn't the quality of depth that you would see in the Midwest where I had lived much of my life.

Running in Southwest Florida isn't an easy task.  The lack of hills, the heat, and what I suspected, right or wrong, a lack of mileage being asked of the high school athletes in our area made for average results.  Estero's Jeff Sommer was starting to kick things into gear with his DDD program around the time I moved here.  It was focused on quality overquantity and his program was by far and away the most consistent in terms of success in Lee County.

It seemed from my limited perspective that a light switch started to come on by the end of the 2000's  largely due to DDD.  Suddenly Fort Myers was starting to compete with Estero in terms of consistently producing state caliber runners.  By 2010 Estero's Erick Montoya and Kacy Smith made it clear that Lee County was ready to start producing a steady stream of state caliber distance runners.

So the purpose of this blog is to name the top boy and girl distance runners over the past decade along with the top coach.  Looking over the decade we saw a dozen or so runners from the 800 to 3200 that made their names known across the state of Florida.  Fort Myers High produced the first and only boy's Footlocker Finalist from Lee County in Tyler Bennett.  His teammate Emily Edwards enjoyed stellar results.  Emily's sister Jessica who runs for Canterbury has more history to write as she put herself in the the conversation as the best 800 runner to come out of the area after running 2:08.  She has two more seasons to make history.

ECS has produced the Oliveira twins, but Sierra is the only middle distance specialist having clocked 2:11.04 with another year to join Jessica Edwards in the sub 2:10 club with the as yet unmentioned Krissy Gear from Fort Myers. Estero's Montoya and Smith brought were followed by more quality runners like Ayre Beck, Katy Slater, Daley Cline and Alyana Goll.  Riverdale's Chelsey Oliver and Kayla Easterly from North Fort Myers made their marks as well. 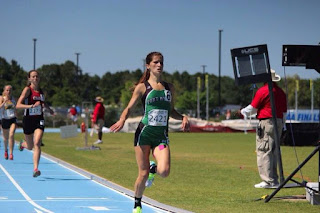 Lee County Girl Distance Runner of the Decade
The best of the best among the girls is the aforementioned Gear.  Soccer's loss was a massive gain for the sport of running.  The only chink in her armor was cross country.  Gear was very good, but not great on the turf.  She excelled on the track breaking 2:10, 4:50 and running close to 10:40 flat across the 800, 1600 and 3200 putting her in a league of her own.  Not only is she the best distance runner of the decade but she is clearly the greatest distance runner produced in Lee County, male or female.

Gear's influence on the Fort Myer's High School program wasn't only on the track.  It showed the young women that followed her what can be accomplished if you put your heart and soul into the sport.  Just look at Stephy Ormsby cross country season this past fall and that says it all. 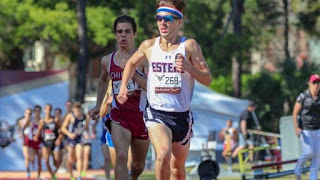 Lee County Boy Distance Runner of the Decade
Estero's Hugh Brittenham caught my eye when he was a mere freshman, but I would have never guessed he would accomplish what he ended up doing in re-writing his school's record books.  The bomb dropped at the FSU Relays with a Friday night coming out party his junior year with a stunning 1:51.92 was stunning.  He left no doubt that he was the real deal following it up with a 4:12 1600 the next day.

Hugh became the first Lee County runner to break 4:10 in the 1600.  He capped his career with the difficult 1600/800 double gold at State and landed a scholarship to Florida.  He did it under the tutelage of three different coaches which is in and of itself even more remarkable.  Hugh may well be the best male high school runner in Lee County history although some would argue Cliff Betts who ran for Fort Myers in the mid-70's is in the conversation.  I plan to research his career to learn more about this three time state champion.

Lee County Coach of the Decade
Estero's Jeff Sommer is the only choice, not just for the runner's who he coached, but for his undeniable impact he add on other coaches across Lee County.  He forced coaches to up their game.  Just ask Rob Strong who coached at Cypress Lake and Fort Myers.  Rob will tell you that Sommer was the gold standard.   Sommer died doing what he loved best, coaching his girl's 4 X 800 team to a State Championship in 2015.  But his DDD program helped propel high school distance running across Lee County to it highest highs.
Posted by Rink's Ramblings at 8:40 PM