This week marks the official start of high school track and field practice in Florida.  2019 was epic and 2020 could be reach heights beyond our wildest expectations.2019 could be a historic year for high school middle distance running in Southwest Florida.  Sorry guys, this is the year of the woman.

Any one of a half dozen boys could be the it distance runner in Lee County this year. Estero's Hugh Brittenham's large shadow that dominated the state for the last two years.  He's now lacing them up for Florida so that begs the question, which runner or runners will dominate the scene.

Track and cross country really are two different sports so that doesn't mean the boys that owned the area during the fall of 2019 will show up in the spring.  Fort Myers has two runners capable of running dipping under 4:30 in the 1600 and 9:40 in the 3200, Liam Holston and Colsen Palmer.  Ida Baker senior Franklin Cacerces should be a handful as well.

SFCA's Ethan Tank is a year older and a year stronger and the junior distance runner showed a lot of promise as a sophomore.  And who knows what will rise out of the Estero fleet of distance runners.  Colton Tucker has a lot to prove going into his senior season and I like his chances.

The question is will a wild card emerge among the boys?  A couple of sophomores could emerge, Evan Meyer from Lehigh or Jacob Fritz from Ida Baker.  A season of cross country could help an injury free Oglar Bartolon from Dunbar as well.

The smoke show will come from the gals.  The Oliviera twins will leave ECS after this season as legends.  Both will compete next season for the University of Miami.  Moriah will keep her focus on the 400 which is a shame because her 800 potential is off the charts.  That leaves Sierra to make a little more history at the longer distance before graduation.  Sierra clocked 2:11.04 which is national class.  If she breaks 2:10 she will only be the third Lee County girl to do so.

Unfortunately for Sierra, another local stud stands in the way of her for a state title.  Canterbury's Jessica Edwards ran a 2:08.4 to defeat Oliviera for last spring's 1A state title.  With two more years of running at the high school level in front of her, Jess could do all sorts of damage to the best ever lists for Lee County girls.

She's capable of running 2:05 for the 800 and well under 4:50 in the 1600.  Edwards will dip her toes in the 400 where she wants to run 55 or better, that's stupendous speed for a middle distance runner.  The capper will be if she can overcome her reluctance at the longer distance where a sub 11 minute 3200 seems well within her grasp. 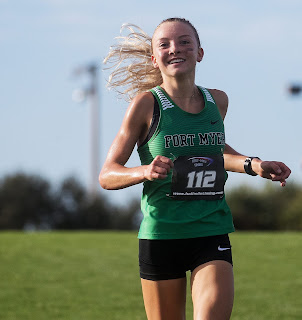 That brings us to the biggest question mark moving into the spring.  Can Fort Myers senior Stephy Ormsby capitalize on her stunning fall in cross country.  Ormsby was a 300 meter hurdler as a freshman.  She rounded into a state caliber 800 runner over her sophomore and junior years.

But Ormsby is a completely different athlete than the one who ran for the Green Wave last spring.  She transformed her body, leaning out, improving her endurance and becoming a real threat to take down some pretty big barriers this spring.

To run those times Ormsby will need competition which she will only get at the FSU Relays and Florida's Pepsi meet.  My guts tell me she will focus on the 1600 because it's a more glamorous event.  I've seen a lot of great high school girls over the last 50 years and I think under the right conditions Ormsby could run under 10:30 for 3200.

Regardless, the distance women of Lee County will own this spring, mark my words.