This has been a tough week.  News today of the death of Sir Peter Snell was the capper.  He was the greatest athlete to ever come out of New Zealand.  His life story is one of perseverance and dedication.  I was lucky enough to meet him and spend some precious time with him. 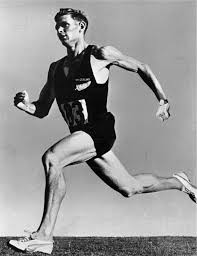 The story of my encounters with this three time Olympic gold medalist goes back to my incredible coach, Tom Dowling.  Tom had met and talked to all of Arthur Lydiard's great runners, except for Snell.  Because I was a journalist and knew my way around a video camera I was invited to go to Dallas with Tom for a sit down Snell.

As much as I loved track and field I knew very little about Peter Snell except that he was a rival of Jim Ryun.  I had no clue as to the incredible record Snell had compiled from 1960 to 1965.  This rube from Kansas was in for an eye-opening encounter.

On June 8, 1986 Tom and I boarded a plane to Dallas.  Since Tom wasn't trusted with a credit card I suddenly found myself renting the vehicle we would use to drive to the University of Texas Southwestern Medical Center where Dr. Snell had been working for the last three years studying physiology on elite athletes.  The tour that Peter gave us was a bit overwhelming.  It was a world class set up for the study of world class athletes.

After about an hour Tom and I headed to Peter's home where we met his wife Miki.  I gazed dumbfounded at Peter's trophy case which held his Olympic gold medals, world record certificates, Commonwealth Game medals and all sorts of other awards.  I was now beginning to wonder how the hell did I know so little about this amazing runner.

Snell had been a natural athlete.  He was built like a human spark plug.  He turned the world on its head by training like a marathoner, giving him the strength to carry his speed through 800 meters unlike any other runner that had come before him.  Snell shocked the world with that combination of strength and speed when he won Olympic gold at 800 meters at the 1960 Rome games.  He followed that up with a string of world records culminating in two more gold medals at 800 and 1,500 at the Tokyo Olympics.

Tom talked with Snell for about two hours going into the Lydiard training method.  Snell was frank about where he and Arthur disagreed in training and you could tell that Tom and Peter were quickly becoming fast friends.  After we all headed out for dinner, Snell announced that Tom and I would be spending the night at their house, not the hotel that we had booked.  I was in a state of shock.

After a night on the couch Tom and I awoke to Peter ready to take us out on his four mile run course around White Rock Lake.  Tom was in good shape.  I was in good shape.  The 47-year-old Snell took off at a gallop leaving Tom and I looking at each other in wonderment.  We rushed to keep up with Snell to take in all of the stories that he was telling on our 30 minute run.

We left the Snell's and headed to Cooper Fitness where Tom wanted to hear from Kenneth Cooper about the physiology of runners.  That was another three hours of blur but I learned that Cooper had tested just about every elite distance runner to have put on a pair of spikes over the previous 20 years to see what made them tick.

Outside of making a tape copy of a documentary for Peter in 1988 and asking him for help with my 1997 documentary about Jim Ryun, I didn't have contact with him.  I got to meet him again, largely because I wanted to show off and impress my new bride.  Tatyana and I were going to Dallas to pick up her son who was returning from a trip to Latvia.  I reached out to Peter to see if I could bring Tatyana by for a short visit and Peter was welcoming.

Tatyana stood in stunned amazement as I had a decade earlier looking at Peter's gold medals.  Then Peter took out a documentary he wanted to show me about Lydiard which featured marathon great Jack Foster.  As we chatted away the morning when there was a knock at the door.  Two long haired, young fans were at the door wondering if Peter could be bothered for an autograph.  Peter welcomed them and that was the chance for Tatyana and I had to gracefully exit the Snell household so these running fans could enjoy their time with the Olympic great.

Peter Snell is one of the nicest men I have ever met.  His wife Miki was just as friendly.  I did my homework after meeting him.  If you want to read a great book about running read his autobiography, "No Bugles, No Drums."  You also need to go YouTube and watch Snell's 1964 victory in the Olympic 1,500.  It's as dominating a win as you will ever see in a world class race.  Plus you can find plenty of great videos documenting his career.

Posted by Rink's Ramblings at 7:07 PM