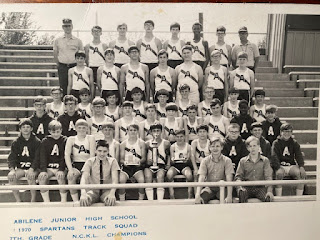 As we roll into 2020, I roll into my 50th year as someone who identifies himself as a runner.  Evidence of it exists in the photo above.  I sit in the second row, on the left, the second in with the sweatshirt on because I wasn't good enough to merit a singlet.  I wasn't good enough to run any of the varsity events.  The only one I had a shot at was 440 yards and my 63 seconds was about three seconds too slow.

I went out for track with visions of Jim Ryun dancing in my head.  I had seen him run the previous spring at the Kansas Relays on a world record setting distance medley relay.  I wanted to run the mile, but it didn't exits at that time in the world of eigth grade high track and field.  I had the stubborn determination to be a distance runner.

I would spend my summer running about 200 miles in preparation of joining the Abilene High School cross country team.  I would make the varsity on a team that would eventually place third in the state of Kansas.  Unfortunately, I would transfer to another junior high in Lawrence, Kansas before that trip to State happened.

But I was a runner, probably logging north of 300 miles in 1970.  The total was certainly well less than the 750 miles I logged in 2019.  That total is the lowest I have run since 1971 when I ran my first competitive mile, a school record at South Junior High and a city record for one, very short year.  I would make the Lawrence High varsity cross country team as a sophomore that fall.

2019 marked only the second time since 1971 that I ran less than 1,000 miles in a year.  Having knee surgery at the end of November 2018 didn't help.  A brutal summer of heat didn't help.  Having a grand daughter nearly killed in a car crash didn't help.  And turning 64 didn't help either.

The fact is, I am still a runner.  I may have plugged away at a barely sub 40 minute four mile this afternoon but it was a run nevertheless and I rue the day that I might not be able to lace up a pair of running shoes and hit the road.  I kept threatening to stop running and racing throughout my 40's and by the time I turned 50 I began to realize what a gift it is that I can still run and race.  I don't care about my times... much.  I just enjoy the feeling of pushing myself, something that I rarely if ever do in training runs anymore.