Don't read this as a look at me, I'm great or feel sorry for me or about me at all.  I just want to write about the difficulties involved with organizing a race, any race, but this one, River, Roots and Ruts comes with a unique set of challenges.  Let me start with the thing I hated most as a competitive runner. I hated running on a poorly marked course.  Once it cost me a win, another time it cost me a second place finish.  River, Roots and Ruts is a race begging for a runner to get lost.

Back in 2016, Steve Brookman, the race founder, says he's ready to give up River, Roots and Ruts.  It's a popular trail race in Lee County that offers a difficult course that's kind of dangerous and really beautiful.  The last year Steve was race director the run was held in the middle of a horrendous downpour.  Runners who loved this race were worried that this was the end so I stupidly offered to take over as race director.

In the fall of 2017 I realized I was hopelessly ill-prepared to take over this race.  If it weren't for trail nerd Phil Nissen the race might not have ever happened.  He got me out and made me familiar with the course.  Phil put together a half marathon that on the face of it seemed overly complicated.  There were too many turns and too many parts of the course that needed human bodies to make sure runners didn't get lost.  This is a race that requires a lot of volunteers and unfortunately I didn't do a good enough job of getting boots on the ground or getting them into the spots we needed them.

Even though I warned folks that they could get lost on the course, they did, and though the vast majority of runners took it for what it is.  Those that did complain stuck with me and those that criticized me, well, where were you when I needed help?  Wind had taken out one of the important course markers and that led some runners astray.  So it was back to the drawing board.

2018 came along and so had Hurricane Irma four months before our race.  The damage to the Caloosahatchee Regional Park was so severe the good folks with Lee County Parks told us if we wanted to race we had better push the date back at least two months.  As fate would have it the Hooters Half Marathon was going away so we pushed RRR to the Hooters date at the end of February.

This year with a ton of help from JeAnne Hertel and the Fort Myers Track Club we put together a half marathon course that we felt would a much better and easier to navigate.  Boy were we wrong.  After spending six hours on a Saturday carefully laying out tape, road markings a signs, a few idiots removed some of the key signs in the expansive Sun Meadows and again runners got lost.  A handful of runners bitched about it.  Why weren't we checking the course before the race.  The answer to that we would have to be out on the course at 4 a.m. covering the entire course on foot with a flashlight before the 8 a.m. start.

I was ready to give up the race.  I hated the stress.  I hated letting runners down.  Yet, JeAnne encouraged me to stick with it and I made the decision to dumb the race down.  I figured if we eliminated the troublesome Sun Meadows we would keep runners from getting lost.  The changes worked, except for a terrible stretch of the course which took runners through a horse trail with ankle high grass.  Plus we shortened it to 10 miles helping the race go fairly smoothly.

My problem was with the pre-race organization.  Lee County had tightened its application rules.  I suddenly was confronted by a mountain of paperwork.  I had to get more than a half dozen departmental approvals.  This goes hand in hand with trying to find sponsors which I am terrible at and getting the tremendous support of the Lee County Sports Authority, without those folks, there would be no River, Roots and Ruts.

The stress of dealing with the paperwork just about did me in.  But once again the folks at Lee County Parks were the reassuring voice in my ear.  Their support and organizational skills, especially from James Eash helped me get through this nerve wracking experience.  JeAnne Hertel deserves a lot of credit as well.

Now I would like to point out that it takes at least two to three hours to take the course down.  That's on top of the five to seven hours of setup to get it going.  Plus there is the endless help of the Mudcutters.  The course is the course on the north side thanks in large part to all of their help.

This brings us to 2020.  I was ready for the paperwork and I was ready to make the trail run even better by getting rid of the section of the course through the horse pasture.  We kept the runners on the challenging single track trail.  But I had built in a course issue for the uninitiated.  If you weren't paying close attention, you could end up doubling back on the trail and I failed to put a human being in a spot where runners needed to be directed back to the finish.  Once again, 20 or so people got
lost.  We guy went off on one of our teenage volunteers making an ass out of himself.

You see I spend the 90 minutes running around like a madman making sure water tables, volunteers and parts of the course get their finishing touches.  We can't mark the entire course the day before because part of the trail is open to bicyclists the day before and they take down and remove anything we put up that may interfere with their ride. 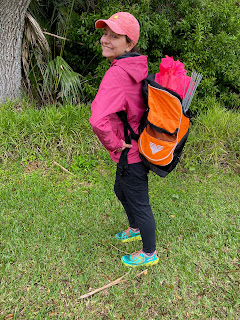 Once again, I had warned the 200 plus runners that they could get lost.  It's part of the hazards.  Just like the parts of the marked trail that had been monkeyed with by a group of uncaring bicyclists that were riding on the south part of the park which is forbidden by county rules.  We knew they could cause mischief and the industrious Addie Jenkinson repaired their damage after we had spent three hours on Saturday making the course idiot proof.

This year I was only nervous about the whole affair in the last week leading up to the race because we didn't get our medals until two days before the event.  The medals were not as good as I would have liked.  I will fix this for the 2021 event.  Just as I will fix the course mistake by making sure we have volunteers in the right spots so the event is a success.

This is a great trail race.  It is a challenging piece of real estate with incredible scenery.  The morning of the race this year I saw deer, a bounding bobcat and a family of wild hogs.  We will do better.  This race is going into its 18th year.  We've got a great sponsor in Hooters and the Lee County Sports Authority.  And remember this, I don't make a cent doing all of this work. Every dime made in this race goes to charity or to non-profit groups that work in support of the race.
Posted by Rink's Ramblings at 7:57 AM