Somewhere along the line an old work colleague of mine decided to run for the United States Congress.  Trey Radel was a pretty good television news reporter with an upbeat attitude.  Somewhere along the line he decided that talk radio was his calling and he became a conservative firebrand.  He was good enough at selling his anti-Obama, Tea Party-esque message that he got himself elected to Florida's 19th District. 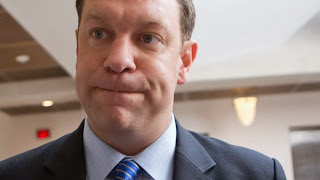 Then he became a national punchline when he got caught buying cocaine about a month ago.  Trey's sitting in a Naples rehab right now, probably  wondering what the hell happened.  Forget about his re-election chances, every Republican with a heartbeat in the state of Florida has told Radel to resign.  I don't care whether he stays or decides to go, I just want him to be clean and sober, period.

But that's not the real point of this particular blog.  Radel's indiscretion has dozen or so Republicans considering a run for the Congressional seat that Trey most certainly can't keep.  What grinds my guts is that voters here would consider any of the carpetbaggers eyeing the seat.  That includes Connie Mack, who used to hold the seat, before his ill-fated decision to run for the U.S. Senate in 2012.  I wonder if Mack even bothered to keep his sham apartment in Cape Coral after his loss last November.

Even worse is all the talk about State Senator Lizbeth Benaquisto wanting to run for the seat.  She's from Florida's east coast.  She got redistricted out of her seat, but kept her job in the Florida Senate by carpetbagging her way to Fort Myers.  I'm not passing any judgment on Benaquito or her politics, but if she runs and voters elect her, get ready for the second coming of Connie Mack.

Mack somehow convinced the voters of Southwest Florida that he was from here when he actually called Miami home at the time.  Mack never visited his district.  He rarely dealt with the local media.  He was a complete ghost.  Mack even went so far to marry Congresswoman Mary Bono, so it's pretty clear where he spent most of his off time.  Palm Springs, California is a hell of a lot more fun that Cape Coral.  Mack's divorced now and sort of swinging in the wind now as a some sort of lobbyist in DC.

Regardless, I don't know who should replace Trey Radel when the inevitable happens.  I just know that the voters of Southwest Florida deserve better.  They deserve somebody who actually has a home here, who actually cares about the community.  If Radel did one thing right during his time in office, it's that he stayed connected, he came home, he talked to reporters.  He wasn't a carpetbagger.

Posted by Rink's Ramblings at 7:54 PM