Almost anyone born in the 1950's remembers what happened on November 22, 1963.  The United States lost a President.  I was in the 2nd grade.  I was sort of a lost 7 year old at the time.  If anything was announced over the PA system at Garfield Elementary I certainly don't remember it.

What I do remember is the commotion on the steps of the school as we left for the day.  I clearly remember other kids talking about something bad happening to President Kennedy.  When I got home I came to the realization that Kennedy was dead, the nation seemed to be on lock down.  Honestly, my mother and step-father didn't seem too upset one way or the other. 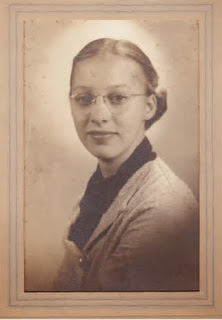 What would happen 35 years after Kennedy's assassination sticks with me a lot more.  That was the day my mother died.  Frances Longhofer died on a beautiful Sunday afternoon, November 22, 1998, after a battle with lung cancer.  My little sister woke me up with a panicked phone call that Sunday morning.  I thought then and there she had died.  But Mary was simply exasperated, asking me to come from Kansas City to Lawrence to stay with our mother so she could get away from a very cranky Frances.

I made it to Lawrence in 45 minutes.  I walked into the house at 1934 Emerald Drive and first saw my Aunt Anne.  The look on her face said it all and what it said wasn't good.  My mother was going through her death throes.  It was sometime around 11 a.m.  Soon my oldest sister and her husband would be there and the watching and waiting began.

I prayed for my mother.  I prayed for her suffering to end because she was clearly in agony.  My brother-in-law stayed in the living room, dealing with his own very deep feelings.  My oldest sister Dianne and little sister Mary kept an almost constant vigil.  I couldn't sit still in my mother's bedroom waiting for death.  It was heartbreaking and painful to watch.  I would go to the living room and back, seemingly countless times.

Finally, sometime around 3 p.m., Frances was gone.  We waited, Dianne broke the tension with a crack about who my mother would choose in heaven, my father or step-father.  We finally called the undertaker and it was over.

The three days leading up to my mother's funeral were the exact opposite of waiting for Kennedy's burial.  The day after Kennedy's murder the weather turned cruel and cold in Abilene, Kansas.  It forced me to stay inside and watch the unending national agony.  The newsmen repeated over and over again the same, scant details about what happened in Dallas.  Tens of thousands filed by Kennedy's casket in the Capitol Rotunda.

Sunday's murder of Kennedy's assassin, Lee Harvey Oswald, was merely a bizarre distraction.  It was a very grim and scary weekend.  JFK's funeral on Monday was a relief, the lighting of the eternal flame by Jackie signaling the end of four awful days.

The day after my mother's death I faced a dilemma.  My sisters and I had to go pick out a casket and make final arraignments for a funeral.  I didn't know if I should slip off to Rim Rock Farm where the University of Kansas was hosting the NCAA Cross Country Championships.  After selecting a coffin and spending a little time back at the house, my sisters insisted that I make the trek out to Rim Rock, where I arrived just in time to see the men's race.

It was as beautiful a late November day as one could hope for in Kansas.  I ran into so many friends.  I was sort of in a state of shock as I watched Adam Goucher run to a national championship.  I went into the press tent afterwards with our photographer Phil Maslin to listen to what reporters would ask Goucher.

They asked the normal ignorant questions that sports reporters asked runners.  So I finally spoke up and asked Adam if he had thought about a teammate who had died during the season as he raced away to victory.  The reporters shot me some jaw-dropping looks.  None of them known about the horrible loss Goucher and his teammates had endured.  Goucher teared up and gave a brave response.  I can't remember what he said, but I had done my job as a journalist and gotten to the heart of what his victory had meant.

I do know his words helped me reflect on what I had been through over the last 24 hours, for the last six months watching my mother wither away.  Her death pulled me closer to my three sisters.  But worse was to come.  The death of my mother's only sister less than a month later and brain cancer for her only brother less than a month after that.

But for that moment on a crisp fall day on the world's most beautiful cross country course, I knew what peace was, I had watched triumph and I knew that I could continue on with my mother's memory woven deep in my heart.  We buried Frances on November 25, 1998, 35 years after a nation had buried JFK.
Posted by Rink's Ramblings at 6:20 PM