The Agony and the Ecstasy

This season will be a game changer in the direction of Kansas Jayhawk basketball.  The past three seasons K.U. has dipped its toe into the pool of players known as the one and dones.  Brandon Rush was supposed to be one.  Thank goodness he stuck around to win a national championship.

Xavier Henry beget Josh Selby, who beget Ben McLemore although Ben technically was in school for two years.  Now Kansas has a recruiting class that conceivably has three one and dones.  Move over Kentucky, that's Kansas moving up in your mirror.  I understand it, but I hate it.

I don't blame Andrew Wiggins for declaring his plans to play just one year.  As great as he is, he does not have an NBA body.  And he's not Kevin Durrant tall with unstoppable range either.  Wayne Selden's got a body ready for the NBA but his game lacks polish.  And Joel Embiid has great hands, but doesn't have a clue on the floor and lacks the strength needed to bang in the NBA.

Each one of these players could use two or three years in college.  I bet we'll be lucky to get two more out of Selden or Embiid.  What we can count on is the hidden jewel in the best recruiting class in Kansas history.  Frank Mason is a flat out baller.  And he'll need to be if Kansas is to make a run this year.

I fully expected Duke to spank Kansas Monday night by double digits.  Then, praise the Lord, Naadir Tharpe picked up 2 quick fouls and enter the freshman.  Frank Mason steadily gained confidence as the game progressed.  Kansas won because Mason didn't play like a freshman point guard and the real Perry Ellis showed up.  If Mason can play at this level Kansas will be a very tough team to beat this season. 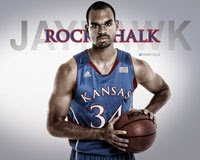 Honestly, this team will go only as far as Mason and Ellis can take this team.  Wiggins will get his 15 to 20 every night.  Selden will have rough patches, as most freshman do.  Embiid will simply help by eating up minutes in the paint.  And I haven't even mentioned Brannen Greene who can shoot with the best of them or Conner Frankamp who can outshoot Greene.

I never thought I would see another Kansas recruiting class as good as the 2005 group that produced Mario Chalmers, Micah Downs, Brandon Rush and Julian Wright.  Downs vanished after the first semester.  Wright after the second year, while Chalmers and Rush stuck around for a third year and a title.

This year's group of recruits makes this the deepest team in Kansas history.  Now think about it.  Not one starter is back from last year's Sweet 16 team and the Jayhawks are deeper this year than last year.  I weep for Frankamp and Landon Lucas, a redshirt freshman, who could start for half the teams in the Big 12 this season.

Unless there is super cohesion with this group, I'm guessing one of these kids will leave at the semester or at the end of the year.  If I'm Greene, Frankamp, or Lucas, I look at the next recruiting class that Self is lining up and wonder where my minutes are coming from in 2014.  It's the same problem that Kentucky kids who decide to stick around as John Calipari brings in top 5 recruiting class year after year.

The lack of continuity kills teams come tournament time.  Yes, you can win a national title with one and dones.  But more often than not come tournament time, experience is what gets you into the Final 4, even if you're talking about sophomores or juniors.  This Kansas team could win a national title, but the odds are stacked against it and unfortunately, most of the recruits in this class won't stick it out to do what Chalmers and Rush did.
Posted by Rink's Ramblings at 6:20 PM