An old running compadre from Lawrence used to share a nickname with me.  Paul Boone and I would address each other as Doughboy.  I got the belly first, but Paul followed a couple of years later.  But even back then with the extra pounds we could still both run pretty darn fast.  The belly is beginning to take its toll. 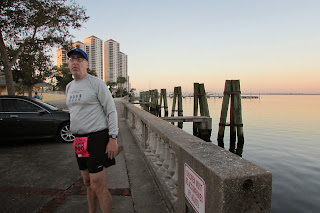 I ran my first "serious" race in almost 11 months this morning.  It was a race I had run a couple of years ago and enjoyed, despite the fact you to traverse some pretty long, steep bridges, not once, but twice.  The River Run 10K is takes runners across the beautiful Calooshatchie River.  The price that comes with living in paradise is that it can be a little toasty, even in December.  Don't let the long sleeves full you, by race time at 8 a.m. it was getting warm and humid.

I tried the same tactic I used the last time I ran this race.  I went out carefully know we would hit the first bridge about 1.5 miles into the race.  I was about :20 slower for my first mile than I had been in 2011 and thought, okay, I can hold this.  I was fine going up the bridge the first time and proceeded to pick off people.  But I could feel my pace was lagging.  By the time I hit the bridge the second time I was one hurting puppy.  I was still catching people but I just couldn't get a good rhythm.

I never looked at my watch after the first mile and was merely hoping to break 50 minutes.  I ran 51 flat, 4:30 slower than what I managed the last time I ran this race.  The lack of speed is due in part because I just haven't pushed myself in most of my runs.  The other problem is my weight.  I'm about 8 to 10 pounds heavier than I was in 2011.

I was stressed out in 2011 because of my job or lack thereof.  The stress suppressed my appetite, plus I was training a lot better.  I can lose the weight.  And I am slowly adding more miles and plan to add some intensity.  The most important thing is I wasn't really tired when I finished.  That tells me I might be able to run the half marathon I have planned in January a minute or so faster than I did last year.

I have a 5K on tap next week.  I am going to try and take it out a lot harder than I did today and hold on for dear life.  I've got to learn to hurt again.  You know, no pain, no gain, and maybe I can ungain some of these lbs!
Posted by Rink's Ramblings at 4:32 PM