I've been meaning to write this blog for about the last three months.  It dawned on me in August that my running had descended into the 7th level of hell.  I was running slow, really slow.  I just don't care about going out for a run and pushing the pace.  Because of it I even went to a couple of group runs just to make myself run under 9 minute pace.  I didn't even want to think about racing.

I've been running injury free since March.  I've steadily piled up 30 to 35 very slow miles every week.  Even with the onset of cooler, less humid weather, the slow pace remains.  So I shocked the Czarina last night when I announced that I wanted to run a 5K this morning.  I wanted a race just to shake up the body and with prime racing season at hand I wanted something low-key before I start really trying to race in December.

I picked a 5K race at Koreshan State Park.  I looked at the park on Google Earth and saw paved roads and prayed the course would just loop through the park and maybe shoot out onto Corkscrew Road.  But I knew they also ran trail races at that park but I decided to go for it anyway. 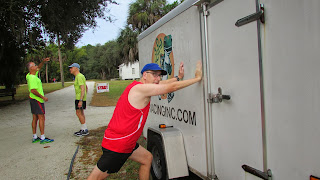 It was a small affair with a nice mix of teens, 20 something's and geezers like me.  I could also see that there would be some trails but I was hoping it wouldn't be too big a part of the equation.  I put on my racing flats for the first time in more than a year and took it out fairly easy not knowing what lay ahead.

The first mile was mostly sugar sand.  The footing was awful and I just wanted to make sure I didn't trip on a root or fall.  I tucked in behind a guy about 10 years younger than me and tried to work off of him.  I was sitting in about 20th place by the mile when a guy about my age glided by me.  Up ahead, I could see a 20 something cross-fit dude start to walk.  When I caught him, he took off again and did this a couple of more times before I finally eased past him.  By 2 miles I had caught a couple of younger runners and started to key in on a 30 something cross fit dude who was walking.

It was the same act over the last mile.  The guy would take off and pass me and then start walking again.  I thought to myself, if you simply ran a sane pace you could run the entire way.  With about 400 meters to go he started walking again.  I caught him and thought to myself, with 200 to go I'm going to sprint my fat ass off because he's going to catch me if I don't.  I sprinted and I could hear him coming and I held him off.

I need to try and do some more tempo runs.  I plan to run a 10K in three weeks and follow it up with another 5K.  My right hip is killing me and I'm getting an MRI in January, a pain doctor thinks the four years of pain I've endured (it doesn't hurt when I run) is a back issue.  He wants me to keep running.  All I know is getting old sucks, but at least I'm faster than those cross fit dudes!
Posted by Rink's Ramblings at 2:36 PM