No Love for Leo

He is undoubtedly one of the three greatest milers in American history.  He belongs in the same sentence as Jim Ryun and Steve Scott.  Yet Leo Manzano gets very little love.  This Mexican born American who came to running prominence while at the University of Texas, finds himself in a strange situation.  Leo has no shoe contract.

Elite track and field stars get a lot of their compensation from lucrative shoe contracts from companies like NIKE and Adidas.  After winning an Olympic silver medal in London, the first American to medal at 1500 meters since the great Jim Ryun, Leo has no shoe deal.  NIKE severed its ties with Manzano when the two couldn't agree on a new deal.  It seems Olympic medals don't mean much to "The Swoosh." 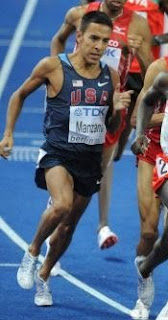 My guess is that Manzano was shooting for a deal that would put him on a par with NIKE's love child Galen Rupp.  Rupp scored Olympic silver in London as well in the 10000.  But Rupp is a blonde haired Oregonian who fits the NIKE profile perfectly.  While the short, dark skinned Manzano, wrapped himself in not just the Stars and Stripes last August after his stunning performance in London, he grabbed the flag of Mexico as well.  Leo's name doesn't sell shoes like Rupp.

Manzano is the blue collar success story of American distance running.  He doesn't have any American records like Alan Webb or Steve Scott, or set world records like Jim Ryun.  All he's done is be eerily consistent over the last 8 years beginning with his first NCAA title in the 1500 at Texas.  He's placed in the top 3 the United States outdoor nationals at 1500 8 years in a row.

The Czarina loves Leo, all 5 feet 5 inches of him.  We both watched in shock and awe as he somehow eluded a group of runners that boxed him in with 200 meters to go at last week's Nationals and nearly caught Matt Centrowitz, Jr. for his second national title.  His 2nd place finish marks Leo's 8th consecutive national team for the USA.  Yet he still has no shoe contract.

Leo says he's confident something will be worked out.  It would serve NIKE right if Leo snags another medal in Moscow without their shoes on his feet.  He's more like Pre than the Oregon golden boy that has one.
Posted by Rink's Ramblings at 5:08 PM