I love distance running.  But watching a great sprinter is something special.  It kills me to read the news today about Tyson Gay and the Jamaican sprinters caught doping.  My belief has always been that elite athletes cheat.  I say that even about distance runners. 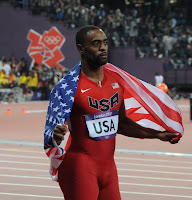 But seeing someone as likeable as Gay get nailed just makes my heart sink.  He looked incredible in Des Moines.  Tyson Gay would have given Usain Bolt all that he could handle.  The World Championships in Moscow will be hollow without Gay, Asafa Powell and Nesta Carter.

The Czarina and I have long talked about what the Jamaicans are taking.  The island nation has produced quality sprinters for years but the last 8 years certainly brings to question what's going on there.  This emergence led by Bolt, creates a nagging doubt.

Don't get me wrong, Usain Bolt was a sprinting wunderkind.  If he had broken world records by hundredths of seconds, not tenths, I could believe it.  It's a lot like the myriad of distance running world records set in the 1990's.  Drugs certainly played a role in a lot of those times.  And I'm not just talking about the Chinese women either.

I love track and field.  I love sprinting, despite its blemishes.  A picture of Justin Gatlin hangs in our living room.  It was taken by my stepson at the Kansas Relays, the same meet where he was caught doping.  They cheat, don't kid yourself, most of them cheat.  It saddens my heart.
Posted by Rink's Ramblings at 2:36 PM