The name Tim Tays first came to my attention sometime in 1977.  It was probably in an article that I read in the Lawrence Journal-World about recruits joining the University of Kansas track and field team.  I remember two things, Albuquerque and 2 mile.  He had run a 9:20 2 mile or maybe a couple of ticks faster and I was surprised.  When it comes to distance runners, Bob Timmons only recruited studs.  I was used to seeing guys who had run faster than 4:15 in the mile coming to K.U.  Tays wasn’t a sub 4:15 high school miler.  But then I thought, this guy is running pretty good times at altitude, so he must be a horse.


Tim came to Kansas during my last year in school.  By then most of my ties to the cross country team were long gone.  Guys I had run with had moved on, All-Americans like Kent McDonald, George Mason, and Bill Lundberg.  My only ties to the team were Tad Scales, my high school teammate, one of the best pole vaulters in the Big 8 and my neighbor, Stan Narewski, was the team’s sprint coach.  I wasn’t very connected to the guys running at Kansas.
Fast forward to 1982.  I knew who Tim Tays was and so did a lot of people.  He was one of the best distance runners in the Big 8 and had set a couple of school records at K.U. in the process.  I spent one of the best nights of my life with Tim and a handful of other runners in late July in Atwood, Kansas drinking beers.  We sat for hours swapping stories with Tays who had just won a 10 mile race besting a pretty impressive list of distance studs.  The stories flowed just as easily as the beer.  I knew two things after that night, Tim Tays was a great guy and a great runner.

I’m not sure why, but I was even invited to Tim’s wedding a few years later in Albuquerque.  Tim had put away his running shoes and seemed content to live the life of a high school teacher and coach.  To me it seemed like the end of the story, it even struck me as a somewhat unsatisfying end as well.


Turns out I wasn’t alone in that feeling.  It turns out that I didn’t know Tim Tays very well.  We reconnected a year or so ago on Facebook.  Then came word that Tim had written an autobiography and he was sending me a copy.  When it arrived in the mail, I had no idea what to expect. 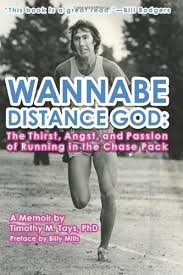 I was taken aback by the title, “Wannabe Distance God:  The Thirst, Angst and Passion of Running in the Chase Pack.”  Reading the first 20 to 30 was like a hard slap to the face.  Tim, like a lot of people, struggled with a way to fit in and yet find a way to stand out.  He did it through running.  When he made a commitment to the sport, he went whole hog.


That’s what I found fascinating.  I ran just enough to be good.  Tim was willing to do whatever it took to be great.  He did it despite a laundry list of obstacles that would make an ordinary person shutter.  The barriers ran the gamut from religion to a college coach who over trained his athletes.  But he didn’t complain or say why me out loud when things didn’t go his way.  But he thought it, he wrestled with it and as he grew as an adult, he figured out how to come to terms with it.  The best part is he realizes it’s an ongoing process, part of the journey we all share in life.
I don’t want to give away the whole journey.  I think it’s a story that will appeal not just to runners, but anyone looking to come to terms with life’s injustices, perceived or real.   You can find the book at Amazon.  Give it a read.