We skipped Wednesday which kicked off the junior portion of the meet.  We fe lew into Kansas City for a little family time and kick taste of barbeque before driving north to Des Moines.  We hit the stadium just as the men's 1500 prelims were wrapping up.  We went Thursday night wanting to take in the men's and women's 10000 meters.  Unfortunately we had brought the weather in Fort Myers with us.

The 10K wars started with Shalane Flanaghan throwing down and daring anyone to brave the heat and humidity to stay with her for 25 laps.  Kara Goucher tried and lasted about 3 kilometers before going into a slow fade.  A pack of 3 led by Amy Hastings reeled Kara in but in the end Jordan Hasay and Tara Erdmann would finish 2nd and 3rd.  Hastings was 4th but she has the "A" standard needed to punch a ticket to Moscow, the other two girls don't.

The Czarina soon realized that watching 10K's require a lot of patience, especially when it's a jogfest like the men's race.  I told her to look for fireworks with a mile to go and sure enough Dathan Ritzenheim delivered ramping up the tempo and running the field off its feet all except for Olympic silver medalist Galen Rupp.

The weather consigned the distance races to the wait and kick category the rest of the meet.  But it certainly made for some hot sprinting with Tyson Gay showing the world and Usain Bolt he's still got some zip in his old legs with a dazzling 100 and 200 meter double.  Then there was a stellar American record from women's hurdling newcomer Brianna Rollins.  It marked the Czarina's first American record and my 6th to go along with 3 world marks I've seen set.

The best racing came in the men's 800 meters.  Duane Soloman ran with guts from the git-go and dared Nick Symmonds to run him down.  He produced a stunning 1:43.27 in taking his first national title while confirming his spot as America's premier middle distance runner.

The other distance racers were all hampered by the heat.  Getting to witness high school phenom Mary Cain make the 1500 team was certainly an unforgettable highlight.  She let out a primal scream on her way to the victory stand.

The Czarina's favorite, Leo Manzano, managed to sneak out of a box and thread his way to a 2nd place finish behind Matt Centrowitz to confirm his status as one of America's great mile talents following his silver medal in London. 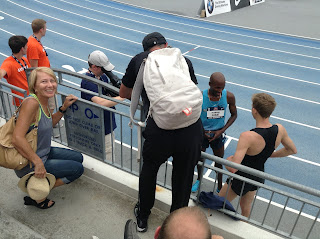 We took a ton of pictures.  But the above is one of my favorites.  Following the men's 5000 champion Bernard Lagat and 2nd place finisher Galen Rupp stopped for a chat with Rupp's coach Alberto Salazar.  Next thing you know the Czarina is sitting at Alberto's feet begging me to take her picture.  I missed when Alberto glanced down wondering who the hell was listening in on his conversation. 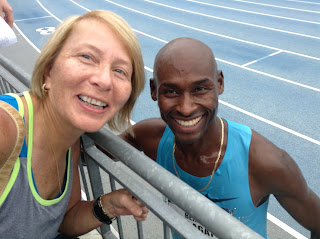 A few moments later we got and up close and personal shot with Bernard Lagat.  He gets a boat load a crap on the Let's Run message born for not being a native born American but Lagat is a class act.  He is one of the greatest distance runners, ever, period.  His longevity in the sport is simply amazing and at age 38, he's got a chance to make the podium in Moscow.

Despite the heat, all in all it was a great meet with three American records all set by the women.  We saw old friends from Kansas City and enjoyed a great competition.

Unfortunately, Des Moines failed the test as a host for nationals.  The crowds were pretty sparse and the facilities don't seem up to snuff.  In fact I've seen other college venues better suited for hosting nationals.  It's hard to compete with places like Hayward Field in Eugene.  It's simply the best place in the world to watch a track and field meet.

Posted by Rink's Ramblings at 5:03 PM