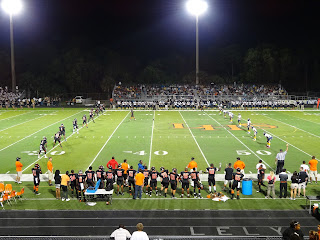 A couple of weeks ago I covered my last high school football game of the year.  I'm not far enough up the food chain to get a plum playoff game but I was lucky enough to draw Naples at Lely, also known around here as the Coconut Bowl.

Naples High School is one of the best high school teams I've ever seen in person.  Offensively they are a powerhouse.  They have a super running back in Manny Morgan and a very good quarterback in Kilton Anderson and a stud wideout, Tyler Byrd, who is only a freshman.  All that Naples is missing is their normal dominating defense.  Their defense may keep them from winning the state championship this year. 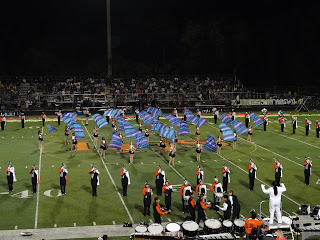 Vlad took the pictures that you see in this particular blog.  The whole affair was an eye-opening experience.  The stadium at Lely is better than 95 percent of the sports facilities in the entire country of Latvia, where Vlad was born.  He asked me who pays for all of it.  I smiled and said, "The taxpayers."  I explained that parents pay a small activities fee and that some fundraising goes on for special trips and what not but that by and large American high school sports, the cheerleaders and the marching band is an expense that the taxpayers pony up for.  He was duly impressed. 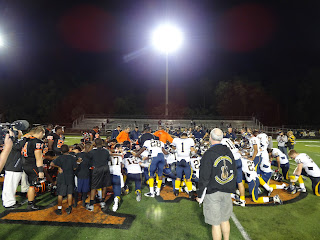 Naples romped to a 56 to 0 win.  I took him down on the field with me as I talked to Naples head coach Bill Kramer.  Vlad was impressed that the two teams that had fought so hard, kneeling down at mid-field together for some words of encouragement and a prayer.  I think he enjoyed the incredible spirit and competitive camaraderie that he saw between the players and coaches.

Vlad is here working hard on a plan that could bring his wife and children to America, to Southwest Florida specifically.  He wants this kind of America for his daughters, our grandchildren.  It's a small part of the American dream, but here's to his pursuit of that dream.
Posted by Rink's Ramblings at 5:05 PM