Time to reflect on the early season promise of the 2012-2013 version of the Kansas Jayhawk basketball team.  This team folded up like a cheap suit at the end of an early season test against Michigan State but the Big 12 better watch out.  This may be one of Bill Self's best teams ever.

This team is basically three seniors and a bunch of freshman.  Fortunately, two of the freshman, Ben McLemore and Jamari Traylor sat on the bench last year, getting schooled by last seasons Final 4 squad.  Ben McLemore will probably be a one and done.  But he's the best player to step on the floor for Kansas since Paul Pierce.  He's stunningly good.  McLemore disappeared in the Michigan State game and for Kansas to be great this year, he's got to demand the ball.

The most reassuring thing I've seen is Jeff Withey is every bit as dominating in the middle as he was a year ago.  He no longer has Thomas Robinson to rely on but Traylor has shown the kind of toughness that K.U. desperately needs in its interior defense to help Withey out.  Plus upperclassman Justin Wesley and Kevin Young have shown enough improvement that the Jayhawks inside game should be steady.

The three biggest concerns surround two of the seniors and one freshman.  The much heralded Perry Ellis has already shown that he needs a year of work in the weight room.  He's getting pushed around in the middle and lacks the strength to go up strong with his shots around the glass.  He reminds me of a young Marcus Morris. 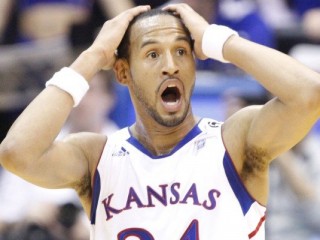 Travis Releford needs to know his limitations.  He thinks because he's a senior he should be a focal point of the offense.  Releford is a role player.  He needs to focus on defense and leave the offense to others.  He's an inconsistent outside shooter to really contribute much offensively.  I hope he proves me wrong.

Finally, Elijah Johnson has shown glimmers that he can step into Tyshawn Taylor's very large shoes.  He can't disappear like he did at times last year.  Johnson has to play a consistent offensive game and stay out of foul trouble.  Naadir Tharpe is a capable back-up, but his defensive liabilities stick out like a sore thumb.

Despite the lack of a real superstar on this team, this could be Self's best squad ever.  If McLemore reaches his potential Kansas is an Elite 8 team.  The Jayhawks should roll through the Big 12 Conference and be a fun team to watch while they do it.
Posted by Rink's Ramblings at 5:15 PM