The Perils of Running

Running is not without its dangers.  I have been hit twice by vehicles while out on a run.  The first time I was on a sidewalk blocked from view by a UPS truck when a driver in a minivan came flying up a driveway in south Kansas City.  I was actually being attentive because I was aware of the truck and the obstructed view so I was able to react by throwing myself up over the windshield.  I broke my ribs.  The woman driver thought she had killed me.  The UPS driver was at fault because he was sitting where he shouldn't have been and he tried to bail on the situation.  He was lucky I'm not litigious.

Then three years later in Fargo it happened again as I crossed a sidewalk with a green light and a 14-year-old behind the wheel of a pick up.  The boy didn't bother to check the crosswalk as he made a right turn into me.  Again I jumped up on the hood and again I broke my ribs.  I jogged the last 2 miles home just as I did after the Kansas City incident.

But the biggest danger is taking a nasty fall.  I've had three bad ones over the years.  Once as a teen I was running down a hill at K.U. through a construction zone and a wire had been strung across the sidewalk.  It was dark enough that I couldn't see it and I did a belly flop on the concrete.  Remarkably I was uninjured.

In 1996 I was running in south Kansas City when I stepped on a shoelace and face planted in the middle of a street.  I braced myself with my hands and ended up fracturing both of my arms near the elbow.  As I rolled in the street in pain an old couple got into their car and drove past me as if I didn't exist.  A postman stopped and assisted me.  I jogged/walked back the mile and a half to home and had a neighbor take me to the hospital.  I couldn't even get my shirt off over my head.

I did it again two years ago while running to pick up my car at the Ford dealership.  I only fractured my right arm as I crashed to the pavement when I somehow tripped myself.  I ran the 4 miles to the dealership, got my vehicle, then drove to the Quick Care clinic to get X-Rays. 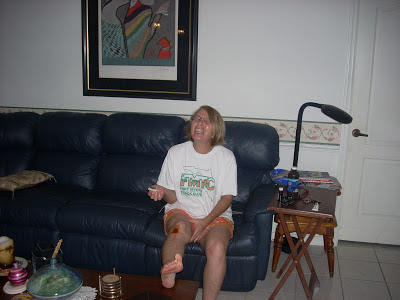 When it comes to falls the Czarina takes the crown, as well she should.  It seems that at least once a year she stumbles and falls while out on a run.  I've personally witnessed one of her epic falls.  The Czarina kind of shuffles when she runs which makes her susceptible to any type of edge or outcropping in the roadway.

She did it again tonight.  She was a couple of miles into a 4 mile run and yes, she finished it.  Fortunately she usually ends up just getting a nasty case of road rash on her knees.  She hasn't broken anything, probably because she doesn't have far to fall.

It's actually not very funny.  As I get older I worry more and more about either the Czarina or myself getting hurt badly in a fall.  I admit it.  I'm less sure of myself on my feet as I'm out on a run, especially if it's dark out.  With winter running at hand and more running in the dark I think it's time to invest in a couple of running lamps.  I don't want the Czarina to run out of iodine!
Posted by Rink's Ramblings at 3:58 PM