A Train Wreck to Television Obscurity

One of the things I do to keep marital bliss alive and well in the household is watch a handful of reality shows with the Czarina.  I actually like watching "The Biggest Loser" and "The Amazing Race."  I could live without "American Idol" and "The X Factor."  And that brings me to the train wreck that "The X Factor" has become.

The first season was barely tolerable.  I like the snarkiness of Simon Cowell and L.A. Reid knows the music business.  Paula Abdul, is well, Paula Abdul, as worthless as tits on a boar.  But I liked the fights between Nicole Scherzinger and Cowell.  But in all honesty the show was a pale version of "American Idol" without the country crooners. 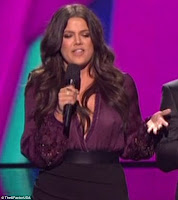 The start of the live edition of the show's second season was a signal that something was seriously wrong.  It was trick or treat as Khloe Kardashian's nipples stole center stage when she showed up as a co-host with Mario Lopez as one of the several unsuccessful makeovers for this stagnant program.  One thing I learned in 30 plus years of working in television is that cosmetics matter.  Khloe isn't beautiful, in fact she's not really cute.  How a person looks does matter, especially if that person is female, sorry.  She's as stiff as a board and shows no personality.  She makes Lopez look uncomfortable and Mario like it or not has personality.

Now add into this hot mess of a train wreck the mindless, mind numbing combo of Demi Lovato and Britney Spears and you have a complete waste of prime time television.  Demi knows as much about singing as I do about running a television network.  Britney is one insipid comment away from a complete meltdown.  In fact that's the only thing that makes the show worth watching, the possibility that Britney could go postal at any moment.

FOX is in a world of hurt.  I doubt that "The X Factor" can survive into a third season and we all know "Idol" is on its last legs.  FOX needs to take a hard look at its programming strategy if it expects to remain the prime time powerhouse that it has been for the last decade.

Posted by Rink's Ramblings at 6:01 PM