Made to be Broken

It's what they say about records.  Sooner or later a record will fall.  This morning one that lasted 33 years fell to the feet of a senior from Shawnee Mission West.  Jonah Heng took down the 3200 record held by one of the greatest distance runners Kansas ever produced, Brent Steiner.  Heng ran 9:06.64 to win his first state championship this morning saving more than a second from Steiner's 9:08.18 set in 1979. 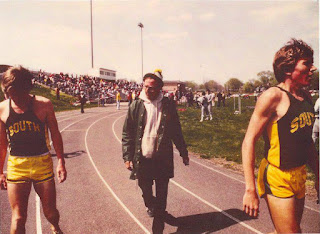 Steiner ran the greatest 2 mile in Kansas high school history in the summer of 1978 losing an epic battle with Louisiana's Bobby Beck at the Junior Olympics.  Steiner ran 8:46.99 to take down the state record set by Wichita East's Randy Smith at the Kansas Relays in 1971.

Steiner seen here on the right in front of the late, great Verlyn Schmidt went on to become an All American in cross country at Kansas.  But it wasn't until he became a duathlete in the late 1980's did he make his mark.  He became the best in the U.S.A. at running and biking. 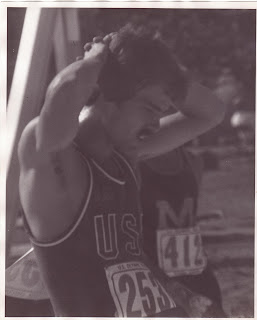 It's difficult to call him the greatest 2 miler in Kansas history because a case could be still made for Smith.  His 8:54.4 at the Relays came on a Saturday following a 4:07.8 mile the day before.  He went on to become an All American at Wichita State in the steeplechase.  Smith captured the AAU National Championship in the steeple in 1975 and was a favorite to make the Olympic team the following year.  As you can see in the picture to the right it wasn't to be.  I captured this image just moments after Smith had bombed out in the preliminaries of the steeple at the 1976 Olympic Trials in Eugene.

If you factor in the difference in distance between 3200 and 2 miles Smith's 9:08.0 to win the state championship in 1971 still stands as a superior mark to Heng's effort.  But think of the potential.  Heng could become the greatest distance runner at a school that has produced some talented runners.