So I'm Off by a Year

A few weeks ago I started waxing nostalgic for a trip home to run the oldest road race in Kansas.  This will mark the 41st year of the Lake Atwood 10 mile.  I thought I first ran the race in 1972 but I was off by a year.  I ran another 10 mile road race, my first in fact.

I had told my friend Chris Ronan 2012 would mark the 40th anniversary of my first run at Atwood.  I was off by a year.  In 1972 when I was 16 I traveled to to La Crosse, Kansas to run my first 10 mile race.  My friend, Greg Morgenson, had invited me to join him for the first year for this race in a tiny town in West Central Kansas.  La Crosse was to be the first jewel of a 10 mile triple crown.  Races in Atwood and Phillipsburg were to follow later in the summer.

I don't remember much about the race.  It was a simple out and back course, much of it on gravel roads.  It was damned hot too.  It was the first time I ever saw Jim Hershberger, a multi-million who was a great masters runner who was pretty flamboyant.  I remember at the start of the race some joker was running in spikes.  Given that the first half mile or so was on asphalt I can only imagine how much that must have hurt.

Greg ran really well and won an award.  I ran somewhere in the 65 minute range and finished just outside the top 10.  Hershberger came up to me after the race with some advice.  He told me to stop running up on my toes.  My junior high coach had forced me to become a toe runner earlier in the year.  It would take me another six months or so to take Hershberger's advice.

Anyway I didn't get to go to the other races in the 10 mile triple crown that year.  My mother wasn't too keen on spending the money for anymore three hour plus road trips to Western Kansas.   The races in La Crosse and Phillipsburg quickly faded away, but Atwood would endure.  It survived mainly because it was kept alive by a former Jayhawk distance runner, Bob Creighton.  It survives to this day even though Creighton passed away 9 years ago.

My first trip to Atwood would take place the following year.  The first of many adventures to this historic race. 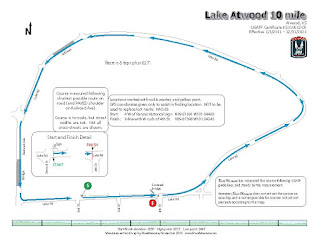 I made that journey in 1973, the summer before my senior year in high school.  I was in really good shape.  I made the drive with Bob Silipigni, an old high school teammate.

It was late July and hotter than the dickens.  The race was 8 laps around the lake.  Later when Creighton had the pancake flat course certified it turned out his course was about 600 yards short.

I remember going out way too hard in that race.  I was up in the top 10 for the first 5 miles before I started a slow fade.  I'm pretty sure I went through the first 5 in about 28:30.  I ended up running 60:10 finishing back in 15th place.  I was 3rd in my age group good enough for a nice plaque.  The only age group award I ever won there. Creighton always had different prices finisher awards aside from the ordinary t-shirt.  That year it was a coffee mug.  I remember another year it was a stocking cap.

If you look at the finisher results from the first 15 years or so of this year you could see it was a who's who of top distance runners from Kansas and Colorado.  Some great K.U. runners made the trip to Atwood.  Kent McDonald, George Mason, Jon Callen, Bob Luder and Ted Crank all ran Atwood, but only 2, Tim Tays and Tim Gundy ever won it.  The Colorado guys, usually Jon Hunsaker or Jon Sinclair pretty much dominated it.

I have too many Lake Atwood memories for just one blog.  I've run it 8 times, more than any other road race in my life. One of those trips nearly included a night in jail.  But that story will have to wait.
Posted by Rink's Ramblings at 8:25 PM