Time to return to the chronicle of my career in broadcast journalism.  I started 1999 as the Senior Executive Producer in FOX 4 in Kansas City.  It was the beginning of my 12th year at a station I had worked at on three separate occasions.  My mother had just passed away and her sister a few weeks after that.  Life was unsettled.

To start the year my Uncle Bob who had undergone surgery for lung cancer the previous June would learn in January that he had a brain tumor.  The surgery changed his life and that of his family in ways that I can't even describe.  I have written about my uncle before and he was an important figure in my life.  The crush of bad family news left me with many a sleepless night. 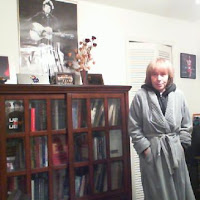 I had been dating here and there for the last couple of years and on Valentine Days I had arraigned an on-line meeting with a woman from Russia.  We met at a Barnes and Nobles north of the river.  I remember the bright yellow blouse she wore, the freckles and big smile.  I offered to buy her coffee.  Little did I know that we would be married four months later.

To quote Ferris Bueller, "Life moves pretty fast. If you don't stop and look around once in a while, you could miss it." My personal life was a train wreck until I met the Czarina.  I don't know why but I knew I needed her in my life.  I saw an inner strength that I lacked.  I gained a whole new family that I love dearly.

Getting married made me reassess my entire life.  Work was a mess.  I was up for a promotion that I didn't get.  The whole deal was a cluster fuck and while I'm not saying I got screwed but if I didn't then Sindy Gaona did.  I ran a tight crew at night.  We were really good at seeing the tree in the forest and turning great stories.  Our new assistant news director didn't hesitate to exploit our abilities to his own benefit and that pissed me off in no uncertain terms.

I had a choice to make.  I could go running to my news director and whine like a little bitch or try one final time to travel the news director path.  I chose the later.  Looking back I wish I had stuck it out.  I was being self-centered.  I overlooked the needs of my new family and in particular the needs of my new 16-year-old stepson.  Andrei had been whipsawed from Latvia to a new high school in Kansas City.  Then he was uprooted to a second high school for his sophomore year.  Another move would mean three high schools in three years.

Work wise I was at the top of my game.  The right opportunity came along.  Our new GM had forced me to quit working on my graduate degree so I felt backed into a corner.  I could either quit and finish my masters or take a news directors position in Fargo, North Dakota.

So in the space of 12 months I met a girl, married her dragged her to North Dakota.  It kind of makes me go what the fuck?  I miss WDAF everyday.  I miss Mike Lewis, Fritz Kramer, Scott DeJong, Sindy Gaona, J.W. Edwards, Randy Davis, John Holt, Phil Witt, Al Wallace, Jana Calkins, Tom SiFuentes and so many engineers and talented people that there is not enough space to tell them what they mean to me to this very day.  But in the end I needed to experience Fargo.  And those three years in the great white north mean more to me than any that I've worked in this god forsaken business.  But that's a whole nother blog.
Posted by Rink's Ramblings at 9:32 PM