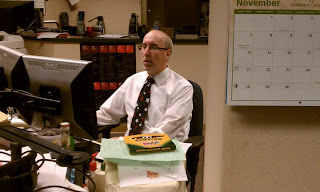 Television news is one fucked up business.  The consultants have ruined it.  The bean counters have gutted anything that contributes to quality storytelling that contributes to making the communities we live in better places.  I say this knowing that television has gone through many Golden Ages.  The newness and the live nature of 50's television.  The rise of Cronkite and the anchor as God in the 60's.  Great investigative journalism came to the fore in the 70's and by the 80's the technology caught up and we could be live just about anywhere our heart pleases. The bean counters took over in the 90's and with the growing influence of the Internet the journalism took a major back seat to the business of news.

I'm a dinosaur who believes in what I used to see at KARE in Minneapolis, 60 Minutes and yes even the well crafted feature by reporters like Wayne Freedman, Barry Bernson, John Pertzborn and Boyd Huppert.  They have the gift of telling a great story in an entertaining manner.  It's a rarity anymore as even some of the most prestigious TV news shops teeter closer to become journalistic sausage makers.

I write all this as I adjust to my new surroundings at WFTX in Fort Myers.  The station has the best focus of any news operation I've ever worked at and I've worked in some pretty top notch newsrooms.  Our resources are limited, both technologically and in the sheer numbers of bodies we have.  But our news director has such a razor sharp vision of what our role in our community is and in a lot of ways made this one of  the easiest newsroom environments I've ever experienced.

We try to stand up and be a voice for our viewers.  We work exceedingly hard at holding our government and business community accountable to the people they serve.  The tough part is that through our aggressiveness we've stepped on a few toes along the way.  Politicians don't like being persistently questioned about controversial topics that they don't want to discuss.  The same hold trues for PIO's for government agencies and area businesses that land in our cross-hairs.

The sad fact is that I took a great class about 15 years ago at K.U. that dealt with that yen and yang relationship between journalists, government and the business community.  The takeaway that I had is that the businesses, government and politicians that avoid negative press take a pro-active approach.  They don't dodge, delay or deflect when tough issues get laid at their doorstep.  They approach it head on and even in the light of negative press enjoy a positive community perception in the end.

I was skeptical at first regarding our approach to our persistent approach for accountability.  In the past the station could be entirely too overzealous in that quest for truth.  But at least this newsroom has a consistent approach that positions us in a different light from that of our competitors who practice the it bleeds it leads style of journalism.  That's not to say WINK and WBBH don't do some outstanding in-depth reporting, but they are mirror images of themselves.  WFTX is attempting to succeed by taking the road less traveled and there's a sense of satisfaction from serving those who truly are the voiceless in a time where we all know, the media is the message.
Posted by Rink's Ramblings at 9:45 PM