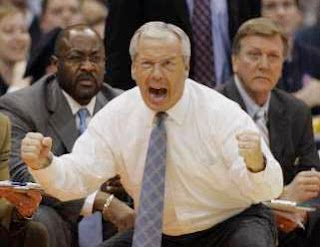 The saying goes that time heals all wounds.  Roy Williams decision to leave Kansas for his beloved North Carolina in 2003 many Jayhawk faithful took it as a betrayal.  After all a tearful Williams (when isn't Roy tearful) had said no to a return to Chapel Hill three years before.  But after a third Final 4 appearance and a loss in the title game to Syracuse ol' Roy decided to embrace Tarheel Blue.

It never bothered me that much.  Kansas had hired a jackass to replace Bob Frederick as its athletic director.  Al Bohl ran the athletic department like a used car salesman and his treatment of then football coach Terry Allen had stuck in Williams' craw.  When former K.U. assistant Matt Doherty failed miserably at North Carolina the job came Williams way and this time he said yes.

I remembert the alumni rally in New Orleans at that 2003 Final 4 and the rumble through the crowd focused on Williams possible departure.  Everyone I talked to wanted Bill Self to succeed Williams if the unthinkable happened, which it did.  Self, of course, helped ease the pain of Roy's return to North Carolina by beating the Tarheels in the Final 4 and claiming the 2008 NCAA Championship.

Today as Kansas rolled by the Tarheels claiming a seemingly impossible trip to the Final 4 I thought back to Roy's Final 4 teams.  Of his 4 trips to the Final 4 Roy took 3 over achieving teams to the big dance.  His best team ever lost in the Sweet 16 to eventual national title winners Arizona.  His 2002 Final 4 team was the best team in the country but lost in the national semi-final.  Roy gave K.U. more than its share of thrills but it could never close the deal.  The main problem was that Roy's teams were soft.

Bill Self's teams are not soft.  I loved watching K.U. play Roy Williams style of uptempo basketball.  But Bill Self has burnished Hank Iba toughness along with an ability to play uptempo when needed into a meld of winning basketball.  Kansas won against North Carolina State and Purdue in tough physical fashion.  These were games that Williams teams would have failed at.  That lockdown, gut check, ability is why Kansas beat North Carolina today.  Also it didn't hurt that the Tarheels were playing without their point guard.  But give Bill Self credit.  He's taken a team not even picked to finish in the top 3 in the Big 12 all the way to the Final 4.  I love what Roy Williams did for Kansas basketball.  We would have never gotten Bill Self without him!  Rock Chalk!
Posted by Rink's Ramblings at 5:29 PM