I've written more blogs about this year's Kansas basketball team than any other.  It's a team that just keeps on giving and giving.  Every starting player on this team at one time or another has stepped up in a big game to lift the team to a win.  Last night it was Elijah Johnson's turn. 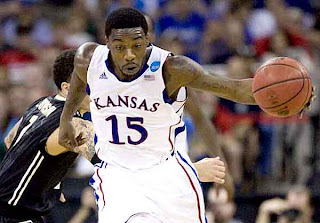 Purdue did an amazing job of playing physical basketball.  By pounding the crap out of Thomas Robinson and putting the fear of God into Tyshawn Taylor the Boilermakers blunted the Jayhawks' two best offensive weapons.

But after a sleepy start Johnson stepped up in the second half and carried the team to a victory.  I saw a player who is ready to do what Tyshawn Taylor did this year.  I saw a player grow up and take charge.

This season of Kansas basketball has been one of the most satisfying since Roy Williams first Final Four run in the early 90's.  Given the lack of depth I thought this would be a Kansas team that would barely win 20 games and had no prayer of getting to the Sweet 16.

Bill Self has done an incredible coaching job.  In the first half you could see that playing a traditional man to man against Purdue was disastrous.  Suddenly in the second half Kansas employs an amazing Box and 2 defense that bottled up the Boilermaker's long range threats and gave Kansas a chance.

Then there was Johnson.  A player who I thought next year would have a difficult time winning a starting job.  You could see a stunning lack of confidence from the beginning of the season.  But then a switch seemed to switch on about halfway through February.  Elijah Johnson has grown up and like his back-court mate Taylor has learned not to carry the weight of his mistakes.  I credit the confidence to Self's coaching.  Bill Self never gave up on Elijah Johnson and it's paying off now.
Posted by Rink's Ramblings at 11:40 AM