Standing on the Rim

Kansas has rolled halfway through its season undefeated and I still don't know what to make of this team.  I thought Monday night at Baylor would be a sure wake up test and possibly the Jayhawks first loss of the season.  I couldn't have been more wrong.  K.U. came out and played the best half of basketball I've seen this team or any Kansas team has played since the first half against North Carolina at the 2008 Final Four. 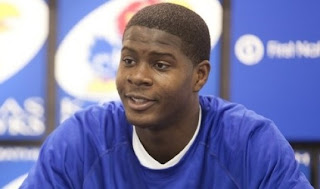 Saturday's game against Nebraska showed a lot of holes in the Jayhawk attack.  What worried me most is that super frosh Josh Selby played only about a dozen minutes and scored just 3 points.  Coach Bill Self left the Selby on the bench in the second half relying on more seasoned players in the second half of this squeaker on K.U.'s home court.

Jeff Withey isn't a player.  You would think after a couple of seasons of banging with Cole Aldrich and the brothers Morris he would have become a decent post player.  He makes Eric Chenowith look like Wilt Chamberlain.

And then there's the puzzling case of Tyshawn Taylor.  He's a turnover waiting to happen.  He plays like Jacques Vaughn one moment and like Jacques Cousteau the next.

But Kansas has one thing that people tend to overlook.  This team is tough as nails and it's not the menacing Morris twins or Thomas Robinson man muscle's that give the Jayhawks that edge, it's unheralded shooting guard Tyrell Reed.  He is the leader of this team.  He picked Kansas on his shoulders when Cal tried to manhandle Kansas last month in Berkley.  Tyrell did it again last Saturday when Nebraska pushed us around.

I get the sense that this is much more of a team effort game in and game out, much more so than the title squad in 2008.  That team could have an off night and Rush, Collins, or Chalmers could will them to victory.  It's going to take a lot more than Tyrell to put this team in the Final Four, the twins, Josh and Tyshawn have 15 or so more games to prove it.
Posted by Rink's Ramblings at 11:07 PM