The Need for Speed 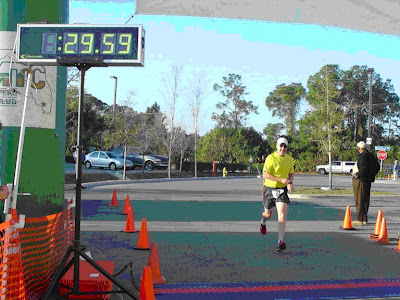 I love to train.  Racing, it's okay, but I love to train.  As I noted before I was somewhat disappointed with the way I ran this four mile race in Lehigh Acres.  It dawned on me this morning what the source of the problem is.

I went out to Gateway to run one of my favorite local 5K's.  It's called "Do the Right Thing" and it's a nice flat out and back.  The weather was perfect and I ran 22:28, about 30 seconds faster than the 5K I ran in February.  It's a good two minutes slower than when I last ran this race five years ago but I'll take it.  I hit the first mile in 7:13 and thought to myself, this shouldn't be this hard.  I maintained the same pace all the way to the finish and was lucky enough to get third in my age group.

I talked after the race with the top dog in my age group.  Perry Small can run six minutes faster than I can.  He's running times now that I ran 20 years ago.  Perry is also about 40 pounds lighter than me but that's a whole different matter.  He only runs 35 to 40 miles a week, about what I do.  His lack of mileage surprised me.  I figured him for a 50 to 60 miles per week guy.  The one thing he does that I haven't done is speed work.

I've been avoiding the track.  It's a two-fold issue.  I spent years in high school running intervals.  I hate them.  That's one issue.  The other is the fear of injury.  My hip is already enough of a problem.  I know if I added a weekly track workout of 400's or 800's it would make a tremendous difference.  But it would also put me on a fine line.

The last time I did interval training was four years ago in Topeka with the Sunflower Striders.  It was great because I could latch on with guys my own age and there was a sense of not overdoing it.  It helped my times tremendously and I didn't get injured.  It only seems to happen when I do them by myself.  I think I just push too hard.  When you have people to run with you can relax and feed off their pace.

I'm going to start doing some speed work.  Even though our racing season is nearly over, I think I can squeeze another 30 seconds off that 5K time.
Posted by Rink's Ramblings at 2:09 PM