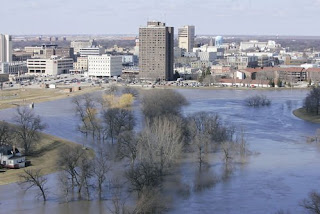 "Sometime I think nobody ever saw me here at all, except the girl from the Red River shore."
Bob Dylan

Let's all say a prayer tonight for my friends in Fargo. I spent three years as a television journalist working at the NBC station just a hop skip and a jump from the Red River. Tell anybody that you're from Fargo or lived there and immediately the comeback has something to do with the Coen Brother's classic film "Fargo."

Across the river from Fargo sits Moorhead, Minnesota. Between the two counties you have a little more than 125-thousand people. It seems everybody knows everybody else, sort of like one big high school. While the folks there are very friendly, they have a way of keeping outsiders at an arms length.

There's no crime, no traffic congestion and good schools. But the winters are awful, the land is flat and largely barren. And every few winters they get too much snow and when it melts all it once, it brings nothing but trouble and heartache. It's doubly cruel as the floods come just as you've survived another difficult season of numbing cold and treacherous snow.

The residents of Grand Forks lived through the terror of a rapid melt after record setting snows 12 years ago and the Red River inundated much of the community. Now Fargo-Moorhead faces the same battle. The levees were raised after 1997 because the flood that slammed Grand Forks, which sits about 90 miles to the north, nearly took Fargo. There's a lot of sandbagging going on right now. Some of it not more than a mile and a half from the house I used to own in Moorhead.

I spent a lot of miles running the trails along the Red River. It's not very wide or deep. It's one of three rivers that flow north in the United States. The Red River makes its way into Canada and eventually to Lake Winnepeg which is connected to Hudson Bay.

So I pray tonight for the communities I once called home. I pray too for their native daughter, Roxana Saberi, still languishing behind bars in an Iranian prison.

Posted by Rink's Ramblings at 4:44 PM