Revenge of the Husband

The tables turned this morning on the streets of Lehigh Acres. The balance of nature restored during a four mile road race. The Old Fat Man took the Czarina down a notch or two.

But first let us return to the scene four months ago to the streets of Cape Coral. It was there that the Czarina demolished the Old Fat Man during a 5K road race. It was a painful experience. The plan had been to let the Czarina hammer it out for the first mile and watch her slowly fade over the next two miles and snatch the race somewhere near the end. This strategy had worked perfectly a month before at a race in Fort Myers where the Fat Man claimed victory about ten seconds.

The difference this time was the course was pancake flat. The Fort Myers layout had featured two massive uphills over a bridge that spans the Caloosahatchee River. Also the Czarina started training at a feverish pitch in preparation for her marathon at Disney. Meanwhile the Fat Man had been suffering through Plantars Fasciatis and had become less than enthusiastic in his training. 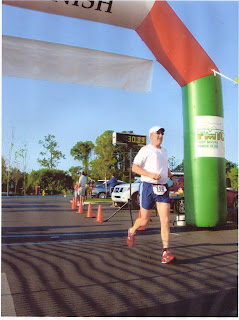 Her victory in Cape Coral had been resounding. As the Fat Man had started to reel in his prize just before the mile something astounding happened, the Czarina started to pull away while the Fattie could only wheeze in disbelief. In the end it was a complete thrashing, with the Fat Man some 50 seconds behind at the finish line and the Czarina hoisting yet another trophy.

Over the next four months much has changed. The Old Fat Man went to the doctor, gotten some anti-inflamatories, and some inserts for his shoes to help with the pain in his foot. Day by day he trained in earnest as did the Czarina. She would confidently pound away the miles while Fattie simply trudged along at first, about a minute a mile slower and then faster little by little, 45, then 30, to now where its about 15 seconds a mile slower than his beloved wife.

The difference maker was the addition of long runs. I hate them. I used to do them with some relish in my 30's, embracing the weariness of 21 miles on a Sunday morning. I knew that slowly increasing my weekend run would help melt the pounds. The Czarina's been handling 13 to 16 milers with regularity, last weekend marked my first 14 miler in about four years.

So the stage was set in Lehigh Acres. The Czarina was confident that she had just enough in the tank to grab one last victory before the Fattie got into serious shape. But it was not to be. The Old Fat Man rolled through the first mile in 7:43, about five seconds behind the beau 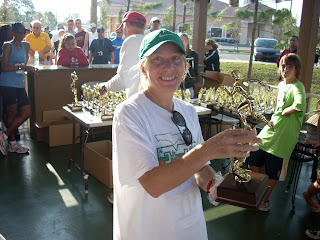 tiful Czarina. Then slowly the distance began to close and at about 1.5 miles the Czarina was heard to exclaim, "Oh my God, it's him!" She struggled valiantly for the next quarter mile to keep pace. The Old Fat Man thought about telling her to save herself knowing that expending such energy could hurt her overall time, but he did not. By two miles he was nine seconds in front and pulling away.

The Old Fat Man crossed the finish line in 30:32, some three minutes slower than the last time he had run this race in 2004. But that was three surgeries and 20 pounds ago. The Czarina trudged home in 31:48, about 20 seconds slower than the Fat Man thought she could run. But in the end the Czarina had the last laugh, hoisting yet another Grand Master's trophy for her victory while the Fattie had to take solace that he was sixth in his age group.
Posted by Rink's Ramblings at 9:42 AM