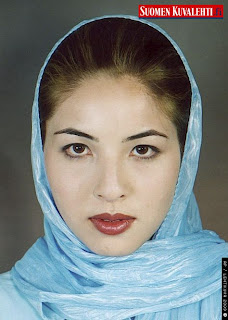 It's been a tough start to the year for a lot of people I know. Whether it's health issues, ice storms, or economic insecurity, 2009 has pretty much sucked so far. But I can't imagine the terror, horror, and unrelenting fear that Roxana Saberi is enduring right now. The diplomatic wheels are beginning to slowly turn. We now know that Roxana is being held in one of Iran's more notorious political prisons. Whatever is going on goes way beyond the purchase of a bottle of wine.

For the few of you out there that read this blog, please call or email your Senators or Congressman. I've already done it. I've made it known that I want the government to do everything it can to ensure Roxana's safe return. I've even emailed the Iranian ambassador to the U.N.

In case you don't understand my concern, people die in this prison. A Canadian journalist died in Iranian custody six years ago. This is a matter of great urgency.

As I've stated in the prior blog, Roxana is an extraordinary person. Here's the last email we shared just two months ago.
Hi, John:
It was great to get news from you. I don't check my hotmail account much anymore. I use this g-mail one instead...
So you have left the news world, at least for now... PR sounds like a much more stable and predictable (and less stressful?) job. I can see the appeal. So how is Tatyana? Is she running as much as she used to? How about you? You mentioned a while that you have diverticulitis. How are you feeling these days? I hope everything is going all right.
I had a slight incident with my knee when playing soccer a few months ago. (A big German guy who works as a guard at the German embassy banged into me. No pity, it seems, for the only girl on the field!) So I'm taking it easy.
Do you enjoy Fort Myers? It seems like it. You've been there the same amount of time I've been in Iran, but I'm ready to move on... maybe in the spring. I still don't have a press pass. The authorities pulled it in 2006. Did I tell you that? They never gave me a reason, and I haven't pursued it because I figured it's no use. Anyway, it's time to get going, but I have no idea to where or to what.
Is Stacey still in FL, by the way? Are you in touch with her? I get back to Fargo once in a while and see Dave Grant and Mel. They still do their Tuesday-night get-togethers at Paradiso's. It's great to catch up with them when I'm back. Dave's enjoying his 4-day a week work schedule.

I hope you had an excellent holiday and that you'll have a wonderful 2009! I don't think I'll be getting to FL anytime soon, but I hope our paths will cross sometime again in the near future. Say hi to Tatyana for me, and keep in touch!
Roxana
Posted by Rink's Ramblings at 3:59 PM