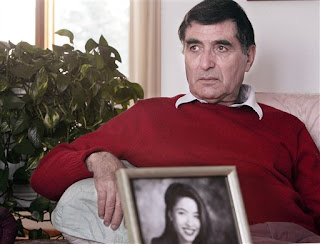 I saw something this morning that has left me shattered. A friend of mine is being held in an Iranian prison. Roxana Saberi has been living in Iran for the last six years working as a journalist. She apparently purchased some wine, a violation of the law in this Islamic state. Her parents have not talked to her for almost three weeks.

I've spent time in the Saberi home. Reza her father and Akiko her mother are remarkable people. Their daughter is even more so. I first met Roxana in the summer of 2000. She had just finished her second masters degree and my boss was insisting that we hire her as a reporter at KVLY TV, the NBC affiliate in Fargo, North Dakota. We were lucky enough to convince Roxana to join us.

She was smart, too smart for television. She was beautiful. I used to tease her about it. We were together at a convention for journalists and time after time the old fuddy duddy news directors would stop slack jawed in their tracks to meet her. Her beauty was unique and understandable given her heritage, a Japanese mother and Iranian father.

But beyond her smarts and looks Roxana is just a great person. She makes friends easily, has a great sense of humor and has compassion. She always had this huge adventurous streak in her and that led Roxana to Iran.

My heart is aching for her family right now. I fear for her safety in the prisons of Tehran. She doesn't deserve this and our government needs to get off its backside and raise hell with the Iranians.
Posted by Rink's Ramblings at 7:45 AM