The grousing, the complaining, the doubts about the future of Bill Self at the University of Kansas, is nearly laughable.  Self just finished his best coaching job in his 15th season at Kansas.  Five months ago I pegged this squad as a possible Final 4 team, a can't miss Sweet 16 squad.  The fact that this team won 26 games is remarkable. 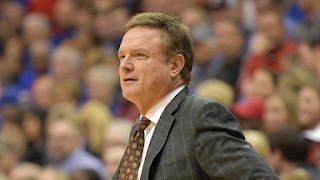 In my estimation, Self only made one mistake with this squad.  He should have never allowed LeGerald Vick to return for his senior year.  Despite his undeniable gifts, it is clear that Vick was a team pariah.  His exit from the squad with a month left in the season was a punctuation mark to one of the oddest careers in Jayhawk history.

What should have been was a Jayhawk team with the most greatest front lines in school history.  Doke Azubuike is the most dominating offensive center in NCAA basketball.  Silvio DeSouza would have been an incredible third wheel in a knock out rotation that includes one of the best three interior players at Kansas in the last 25 years, Dedrick Lawson.

Doke broke his wrist and the NCAA made a nonsensical decision to ban DeSouza for two years because of money his guardian took from an Adidas money man.  When you look at those two losses and the growth of David McCormack over the last month of the season, Kansas would have deployed an unstoppable interior game.

Vick's presence meant a redshirt of Ochai Agbaji who may be the most gifted athlete at Kansas since Andrew Wiggins.  Agbaji got to play after Azubuike's injury and showed that he could bring it on both ends of the floor.  He could be a lottery pick next year.

The biggest surprise on this year's team was Devon Dotson.  He is the best freshman point guard in school history, period.  The only player that can possibly be mentioned in the same sentence as Dotson is Darnell Valentine.  Defensively Valentine was a much better player but as a floor leader and offense threat Dotson was a much, much better player.

The biggest disappointment was Quinton Grimes.  I think he actually played very well for a freshman.  His standout opening game against Michigan State put Grimes in a position of never being able to live up to what fans expected.  What I saw was a better than average defender who is going to be a next level player if he sticks around for more seasoning.

Marcus Garrett proved to be a lock down defender when healthy.  Mitch Lightfoot was an underrated and under appreciated spark plug to the Jayhawks's front court woes  K.J. Lawson contributed energy at times when you would least expected.  David McCormack is going to be a load next season.  Charlie Moore is a waste of a scholarship.

Bill Self got an incredible defensive effort out of this squad that lacked a dominating interior force.  Yes, you saw moments of stupidity on the defensive end from the freshmen but for God's sake, they were freshmen.  The same held true for the offense.  But when they were on, they were as good as any team in the country.  That's right, any team in the country.  But with four starting freshman, you never know what you're going to get.

Self won't abandoned Kansas for the Bulls.  He saw what Chicago did to Fred Hoiberg.  San Antonio would be a different story but I don't think Greg Popovich is ready to leave his coaching seat.  But all bets are off if the Adidas debacle reaches deep within the program.  Self will be gone and the Jayhawks will be hiring Mark Turgeon in quick order.

If DeSouza isn't ready for the NBA.  If he can get his punishment slashed, Kansas will be a top five team next season and yes that's without Dedrick Lawson.  The future is bright.  Jayhawk nation should be celebrating a remarkable year.

Posted by Rink's Ramblings at 8:28 PM