They booed him.  I understood why they were booing him but I chose to cheer him.  I've always had a soft spot for Justin Gatlin and now he had dethroned the greatest sprinter in running history, Usain Bolt.  12 years after winning his first World Championship 100 meter title, the ancient one, Justin Gatlin, was again World Champion.

Gatlin had always struck me as a gentle soul.  When he captured 100 meter Gold at the 2004 Olympics, he was the polar opposite of the man considered America's best sprinter, Maurice Greene.  I liked Greene, a native of Kansas City, Kansas.  He often raced at the Kansas Relays and was a fun interview. 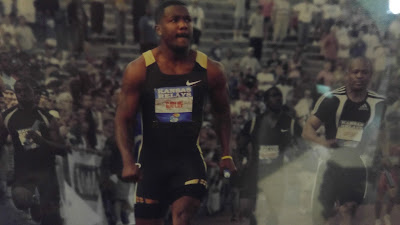 So that explains this picture.  Sorry for the quality but I took it with my phone, as the photo itself hangs on a wall in my house.  If you look closely you can see Maurice Greene far behind Gatlin as they competed in a 4 x 100 relay at the 2006 Kansas Relays.

The photo was taken by my stepson Andrei, as I stood behind him and we watched this incredible piece of running together.  Little did either one of know that shortly after this race, Gatlin would be drug tested.  He was found positive for a steroid and banned from racing for four years.  At age 26 a ban of that length was tantamount to death penalty for his track and field career.

Gatlin claimed that after the race his therapist rubbed a cream containing testosterone into his legs causing the positive.  Now, I believe that a lot of world class track and field athletes use illegal performance enhancing drugs.  But there was always a small part of me that wanted to believe Gatlin's story.

Despite the badge of dishonor, Andrei had taken such a great picture, the Czarina and I agreed to have the print framed and placed on the wall.  We were both fans.  It was a special moment in history that I had witness.

Nine years later I would be in Eugene at the Prefontaine Classic.  While catching up with some friends at Track Town Pizza, I spied Gatlin enjoying a slice with some friends across the room.  I don't usually approach athletes or any celebrity, especially when they are eating.  But I walked over and introduced myself and told Justin that I was a big fan.

I was struck by how small he is.  Gatlin is not especially tall and while powerfully built, he didn't have the pitbull body of his one time rival, Maurice Greene.  Gatlin was incredibly gracious and kind.  A warm smile floated across his face.  I wanted to tell him that his picture hung in my house and the race it came from but I knew better than to uncover old wounds.

Gatlin's return to the sport after his suspension offered little promise.  He looked lost.  Few meets wanted him.  When Gatlin did race he looked ragged.  Somehow by 2012 he was an Olympian.  He would spent the next five years nipping at the heels of the great Usain Bolt.  Then came August 5, 2017 and the 100 meter final at the World Championships in London.

The smile on Gatlin's face as he hit the finish line summed it all up.  He knew he had won.  Bolt had no inkling that Gatlin had exploded over the final 20 meters to overtake him and Christian Coleman.  Gatlin, not surprisingly, bowed down to Bolt when the great champion turned to congratulate his rival.  And yet the fans booed.  Well let them boo.  It was a hell of a race.
Posted by Rink's Ramblings at 7:32 PM