The Future Is Hugh

I've written a lot about the plentiful distance talent among the high school girls in Lee County.  Then, Hugh Brittenham wandered into the store Friday to look at cross country spikes.  Now, I could have sworn I had written something up about this outstanding, young distance talent, but alas I had only a few blurbs to Facebook.  The boys are getting short shrift. 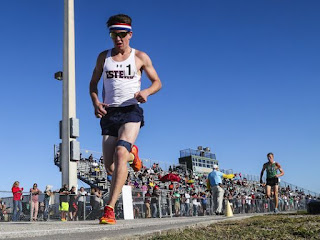 Hugh is preparing for his junior season at Estero High School.  He has a chance to be the best male middle distance runner to ever lace on a pair of spikes in Lee County.  I first noticed his name when he was a mere freshman, breaking 10 minutes for the 3200 and 4:40 for the 1600.  Those kind of times will catch my attention.

The wake up call came like a thunder shot in early spring at a meet in March.  Hugh Brittenham clocked a stunning 1:52.84 800 coming out of the slow heat at the Florida State Relays.  Let me repeat this, 1:52.84 in the slow heat.  He was just a sophomore.

I was stunned because I had seen him run a couple of weeks before at the Edison Relays in Fort Myers.  At that meet he ran a respectable triple which included a leg on the 4 x 800, a 4th place in the 1600 in 4:26.69 and a somewhat surprising win in the 800 in 1:59.37.  The 800 should have been a tip off about what was coming.  He disposed rather easily of Fort Myers senior Evan Babitz who had run 1:56 the year before.  What I saw was a lot of strength by a young runner.  I just didn't realize Hugh had the speed to go with it.

An IT band issue kept him away from the track for a couple of weeks before Hugh returned to take both the 1600 and 800 at the county championships.  At state, Brittenham would finish 2nd in the 1600 in a PR 4:17.78 losing to senior Matt Clark by six tenths of a second.  It wouldn't be until the New Balance Outdoor Nationals that Hugh would show that he indeed had the goods.  He clocked a 1:52.88 800 to finish 2nd in the emerging elite segment of the meet.

Assuming he stays healthy and continues to prosper under the fine coaching of Ben Pignatone, the sky is the limit.  I think Hugh Brittenham could be the first Lee County boy to break 1:50 in the 800 and 4:10 in the 1600.  He's humble, appears hungry and seems realistic about the path to running faster.  Let's hope he comes back in for those cross country spikes.  I wouldn't mind putting a pair of shoes on a future state champion.
Posted by Rink's Ramblings at 9:34 AM