Weather is the bread and butter of local television news.  How stations manage a weather crisis can well position a news operation as the market leader for years ahead.  This weekend the three newsrooms that cover Southwest Florida missed the mark in the midst and immediate aftermath of major floods that swept through Lee County.

While the nation is transfixed on the events surrounding Harvey and the awful destruction the storm has brought to the Texas gulf coast, a tropical system sat atop Southwest Florida dumping copious amounts of rain over a four day period.  The street where I live floods about every five years.  After two days of rain, water covered the road in front of our home on Saturday.  I must admit I didn't give it a second thought. 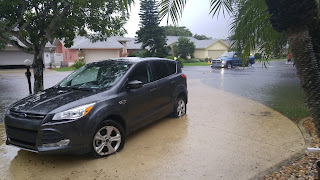 Heavy rains on Sunday changed the equation, completely.  By 3 p.m. Sunday, water was lapping at the front of my garage and creeping across its floor.  Cars began stalling out in my neighborhood as fools attempted to drive through 18 inches of water.  I flipped on the television expecting to see some coverage of what I suspected was a flooding mess that was sweeping across the county.  What I didn't see shocked me.

I flipped through the five channels that one could view local news on.  NBC had NASCAR, CBS golf, FOX was showing NFL, ABC the Little League World Series and the CW had a movie on.  The only consistent crawl I saw was on ABC warning about the flood danger across the area.  Now mind you, flooding was rampant, not just in my little slice of the world.  Roads were covered with dangerous amounts of water over a large area.  Houses a mere five miles from mine were filling up with water.

I saw no cut-in's, no urgent warnings, nothing from the local media outside of pictures on my Facebook feed which should the unfolding disaster.  It wasn't until 6 p.m. when the NBC station finally hit the air that you had a sense that something big was unfolding because all of their main anchors were on the set.  The ABC station took the same tact at 6:30 p.m. as did the CW although all of their main players weren't on the air as one would expect.  The CBS station which owns the CW didn't hit the air until 11 p.m.

All we got from each station was a 30 minute slice of the flooding.  Worse still, it was a mostly light, fluffy, look at the high water type of coverage, outside of the evacuation of a nursing home.  Meanwhile in the Island Park area of Lee County, people were getting water in their homes.  That news really didn't come to light for another 24 hours.

I knew in my guts by 5 p.m. Sunday that this weather event was an all hands on deck type of event for local journalists.  It was as bad as a tropical storm, without the winds.   A tropical storm would bring wall to wall coverage yet none of the stations made the effort.  Fortunately the damage was only in terms of property and not in lives lost.  But Fort Myers news directors need to reassess their coverage plans after Sundays big fail.
Posted by Rink's Ramblings at 11:40 AM