USA distance running is back baby.  The latest ten day run of the World Track and Field Championships in London confirmed the success the United States enjoyed last summer at the Olympics in Rio.  American runners are snapping necks and cashing checks. 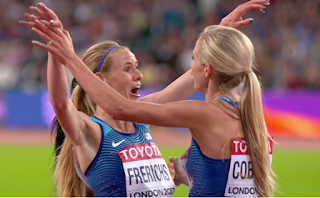 From 800 meters to the marathon, the United States scored medals.  The highlight of this spectacular success was Friday night's one-two finish in the women's steeplechase where Emma Coburn claimed gold and an American Record while Courtney Frerich grabbed the silver, also dipping under the old AR.  Going into the race Coburn, who won Olympic bronze in Rio, was considered on the outside looking in when it came to a medal.  Frerich wasn't even in the conversation. The one-two finish by these two remarkable runners may well be the biggest upset scored by an American distance runner since Billy Mills took gold at 10,000 meters in Tokyo at the 1964 Olympics.

When you add Evan Jager's steeplechase bronze American runners out medaled Kenya in an event they have traditionally owned.  Jager joined Coburn, Paul Chelimo in the 5,000 and Jenny Simpson in the 1,500 as repeat medal winners from Rio.  Simpson's wonderful dash to silver over the last 100 meters was certainly the second biggest surprise springing from the championships.  Her joyous post-race celebration was awesome.  The medal also stamped Simpson as the greatest championship middle distance runner in American history, man or woman.

Amy Cragg's bronze medal in the marathon was the third biggest surprise in London.  A bevy of Kenyans and Ethiopians were expected to sweep all of the hardware.  But Hastings put in a gut-busting run over the last half mile to snatch her medal from a Kenyan rival.

The other American medal came from Ajee Wilson who took bronze at 800 meters.  Wilson's performance put it just a couple of steps behind the American Record.  And given the controversy surrounding the two women who finished in front of her, Wilson could be a favorite for gold in three years in Tokyo.

The only distance where America was shut out was over 10,000 meters.  But a bigger disappointment was over 1,500 meters where a season of injury and health issues caught up to Rio gold medalist Matt Centrowitz.  His body betrayed him over the last lap of the qualifying heat and he finished dead last.

Those are small blemishes over an otherwise incredible string of races by America.  A seven medal haul in London is one better than the six claimed in Rio.  Overall team USA took 30 track and field medals, a fine performance indeed.