I have been asked over and over, why did I stay.  It was a confluence of events that led me to ride the hurricane out in my home.  Trust me, I was ready to fly out to Kansas City on Wednesday but I don't want to get ahead of myself.

Saturday, September 2nd, I drove my wife to Fort Lauderdale where she boarded a flight for Riga, Latvia.  I knew Irma was out there.  All signs showed the storm was supposed to take a swing up the east coast and miss Florida entirely.

The next day it became clear that Irma was tracking further west.  That sickening feeling of anxiety swept over me as I watched the forecasts every three hours.  Given the size of the storm, it was going to do hit the entire state.  This wasn't anything like Hurricane Charley, which is the worst storm I had experienced.  Charley was small and intense.  Irma was a beast.

Lee County was being swept up in hurricane insanity.  Every old fart was out on the road looking for gas, water and food.  It was pandemonium driving around the city.  By the end of the day, finding gas to fill up my car was a challenge.  My wife's children asked me for my big gas can that I had filled for the emergency, reluctantly I agreed to hand it over.

That night the thought crossed my mind to book a flight Wednesday to fly out to Kansas City.  Seats were still available and I had plenty of miles to cover it.  But here's the rub, I was sponsoring the county's biggest cross country meet on Saturday.  At that time, the meet was still on.  I had to be here for it, plus the storm was still tracking east.

Tuesday, the shit hit the fan.  At 11 a.m. I am informed by Fort Myers High School that our meet is being moved to Thursday afternoon.  I scrambled to make arraignments to get my friends from Saucony included in this change.  Two hours later the school district decided to cancel all events beginning Wednesday afternoon.  I think they overreacted.  But it is what it is.  Now I had to consider my options.  Flying out of Fort Myers was no longer one of them, plus I had to implement a plan to protect my home and my store.

Thursday I had a detailed approach to prepping the store and the house.  I had plenty of water.  I had a small generator.  I knew I would close the store on Friday.  Business the entire week had been paltry.  I brought in every item sitting outside that could end up turning into a missile.

Back at the house I sweated my ass off putting up the window shutters.  We hadn't used them in more than eight years and it was a bit of a challenge.  They are old and need to be replaced.  Oh, did I mention, we were supposed to have hurricane proof glass installed by August but that's another story.

Friday morning the son-in-law helped me get the big aluminum pieces in place over the large windows.  I eagerly watched the forecast and it was clear this storm was moving to the west and aimed at Southwest Florida.  I thought about driving out Friday afternoon.  I was talking to my wife, weighing my options when disaster struck.  At 5 p.m. my cell phone died.  It wouldn't charge.  I cleaned to contact points of the battery.  It was dead.

I desperately drove around town looking to see if T-Mobile was still open or WalMart.  Everything was closed.  Feeling betrayed, I decided to head out to Sarasota County, an hour north, where stores were still open.  As I left at 7:30 p.m. and headed to the interstate, I noticed a B.J. Wholesale store still open.  I went inside to a staff on full zombie mode.  Without a membership, they sold me a Samsung phone and a data plan for $158.  I was connected back to the world.  It was late and I didn't relish the thought of hitting the interstate but I did advise my step-kids to evacuate, which they did.

Saturday I woke up weighing my options.  I could flee and go to a friend's house in Orlando.  Flee and hope to find a hotel.  Flee and get caught in gnarly traffic.  I searched the internet for hotels.  Everything in the state appeared booked.  I thought carefully about what being on the east side of the storm would mean.  My guts told me east of Fort Myers might not be a good place to be.

I spent 30 minutes on Skype talking with the Czarina about the options.  Driving out of town into a gas starved state with uncertain traffic conditions at the beginning of tropical storm force conditions just seemed like a big risk.  I decided to stay.  I was at peace.  I knew the storm wouldn't kill me if I took the right precautions.

I prepared a safe place in an interior bathroom.  I had pillows, a helmet and a large mattress to cover me.  I made sure every door in the house was closed.  I carefully parked my truck up against the garage door to secure it against the wind.  Then I realized that I had left one of my most precious possessions in my store and hurried out just before dark to retrieve it.  I was ready.

I woke up earlier than I planned on Sunday.  It was very brisk outside but I wish I had gone for a run.  The run on Saturday was a joy.  The weather was almost crisp.  It was even better than Sunday morning.  Media friends began to reach out to me for Skype interviews and phoners.  As the weather worsened I started playing reporter.

My power finally went out at 2:28 p.m.  I began using my new phone as a hot spot and watched the live stream of the local station.  I could see that the most powerful part of the storm would pass to the east of I-75.  I live four miles to the west of it.  I knew it would be rough, but I was ready.

As the weather got worse, I continued to do interviews for various media.  Then disaster struck.  As hurricane force winds began to pound the house, I notice a shutter was banging violently against the window.  I stripped down, grabbed a pair of exercise shorts and a bike helmet and headed outside.  The pins that hold the shutter down had come free.  I rapidly put them back in place.  They both seemed tight and secure.

One hour later one of the pins had come free again.  The weather was bad but not awful, so I repeated the exercise.  I wish it had occurred to me to grab with plastic wire to tie it down but I was thinking too clearly.  30 minutes later it was loose again and now the storm was reaching its peak.  I made one last frantic dash outside and secured it only to watch it fail again 15 minutes later.  At this point the eye was on the house and I went and hid hoping the shutter wouldn't fly off.

Sometime in the next 45 minutes a large tree in front of the house split in half while another large limb next to my route to the bad shutter also came down.  I am so glad that I wasn't outside for that.
I must admit that last dash outside was exhilarating.  A couple of 100 mile per hour gusts slammed against my body was I was crouched down on the ground.  The rain was vertical and stinging my body.

The worst of the storm lasted less than 90 minutes.  I had survived.  The street had flooded.  My garage and lanai had minor flooding, but it was over and I was incredibly relieved. 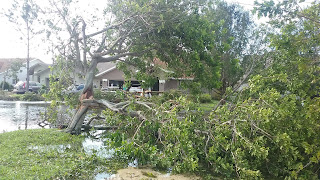 I went out at 8 a.m. the next morning and saw the damage to my property and to my neighbors.  I carefully drove to my store which was in the heart of a zone that was supposed to be hit by terrible flooding.  The store was untouched.  As I drove through my community, the tree damage was abundant, but we had escaped what could have been a catastrophic storm.

Just 30 miles to the south in Naples, the people of Collier County were not so lucky.  Irma was still a very strong hurricane when it came ashore in Marco Island.  The flooding was much more intense.  It will take weeks if not months for some part of that county to recover.

I'm guessing that the following six weeks will be very, very lean at Run Florida On McGregor.  Paying bills could be a challenge.  But it is much better than the alternative.

I am a very lucky man.  Next time I will button up and leave early.  Lesson learned.
Posted by Rink's Ramblings at 6:53 PM