In The Home Stretch

We've rolled through more than half of the distance finals at the 2016 Rio Olympics.  The United States is on its way to one of its most successful Olympics from the 800 to the Marathon ever.  Right now if I could grade the effort I would give it a B+.

It started on Friday with an amazing World Record in the women's 10,000 meters.  Even though Molly Huddle was left almost a lap behind in its wake she still blasted the American Record and finished a respectable 6th.  Our women's marathon team followed up on Sunday with its best team showing in the short Olympic history of the event.  Shalane Flanagan, Desiree Linden and Amy Cragg were all in the top nine.  All three ran terrific times in very hot conditions.

Galen Rupp put his stamp on the title of greatest American 10,000 meter runner Sunday night with his 5th place finish.  He won silver in London in 2012.  The skeptics said Rupp should stick to the marathon in Rio and forsake the 10K.  Rupp made those critics eat their words running a very competitive race and I think only sharpened his speed for this weekend's men's Marathon final.

Monday brought the U.S.A. double bronze.  In very hot conditions, a very cool Emma Coburn played a first rate waiting game in the women's 3,000 meter steeple chase.  The hot pace allowed the Colorado grad to slowly work her way onto the podium along with an American Record with her 3rd place finish.

Monday night Kenyan David Rudisha cemented his place as the greatest 800 meter runner of all time.  But the joyous surprise of that race was American Clayton Murphy's fantastic finish to grab bronze in a stunning 1:42.92.  His time was more than a second faster than his personal best and puts the 21-year-old in position to be a real 1500/800 favorite at Tokyo in 2020.

Tuesday night it was another Buffalo gal, Jenny Simpson, who ran as smart a 1,500 final as you could ever hope see.  Genzebe Dibaba's jaw dropping insane 3rd lap left Simpson and fellow American Shannon Rowbury more than 30 meters off the lead.  Both Americans didn't lose their heads during the chaotic final 700 meters and calmly worked their way up the field with Simpson nearly catching Dibaba for the silver, settling for a well-earned bronze and Rowbury just a step behind in 4th.  Simpson, who went to high school in the Tampa area, grabbed the first 1500 medal ever for an American. 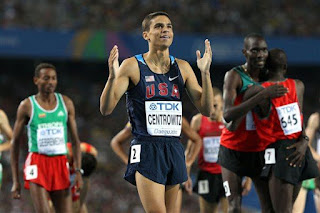 A lot of medal chances remain in the upcoming events.  Evan Jager could break up the Kenyan logjam in the steeplechase with a medal.  Matt Centrowitz has a legitimate spot for a medal in the men's 1,500.  I think the American women have almost no hope to win a medal in either the 5,000 or 800, but Katie Grace could surprise in the later.  Getting to the finals of the 800 is a combination of strength by surviving the rounds and competitive smarts.

The real wild card left on the schedule is the men's 5,000 meter final.  Can a 41-year-old Bernard Lagat win another Olympic medal.  If the East Africans are stupid even to jog the first 3,000 meters Lagat has a chance.  No one in the field, outside of Mo Farah, can kick with Lagat over the final 200 meters.  But I'm not holding my breath.

Finally there's the men's Marathon which starts at 8:30 Sunday morning.  Since it is truly a race and not a time trial like the marathons in London and Berlin, Galen Rupp has a chance.  Rupp is a racer.  He can handle the changes of paces the Kenyans and Ethiopians will throw into the competition.  Another Olympic medal would cement Rupp's place as America's greatest distance runner.

Medals by Jager, Centrowitz and Rupp could take that B+ to an A-.  A Centrowitz Gold over the amzing Asbel Kiprop would bump it all the way to an A+.
Posted by Rink's Ramblings at 8:41 PM