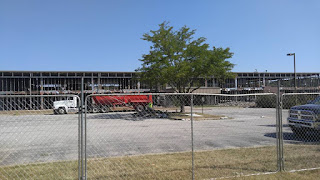 More than 20 years ago an ambitious venture aimed at exercise opened in Overland Park, Kansas called Health Plus.  Today that monument to fitness is being torn down.  I can't begin to describe how sad this makes me.

Health Plus offered a little bit of everything.  It had a small shoe store, it offered personalized coaching, it had a 25 meter pool, a full sized basketball court, weights of all manner and best of all, a decent indoor running track.  The club also sat just yards away from some of the best running trails the Kansas City area had to offer.

I first ventured into the facility in December of 1984 looking to bring some direction to my running as I was about to turn 30.  I sat down with coach Tom Dowling.  He proceeded to outline a six month running program which would have me completing a 21 mile long run by the end of June.  I looked at him incredulous and told him that was impossible.  I had a busy professional career and there was no way I could tackle anything longer than 10 miles in any given run.

I was running 21 miles on Sundays by May.  I had stumbled upon a unique group of runners of all abilities that had fallen in love with Health Plus and with Dowling in particular.  The long runs were so unique, such a powerful show of camaraderie, that I put together a four minute piece for a television sports show about the Sunday runs.

The runs took place over the rolling hills that stretched south of what was then an undeveloped part of Overland Park and Leawood.  There was a traditional water and bathroom stop four miles in at a Leawood fire station.  Water jugs were stashed in the ditches at various parts along the 21 mile route, which we sometimes stretched to 25 miles.  There was always time to stop for a big coke that we all eagerly shared at a Qwik Trip at 151st Street.  On really hot days, a water spigot at a now vanished nursery provided much needed relief at mile 19.

The most important long run I took from Health Plus didn't happen on a Sunday and it wasn't 21  miles.  It was a Saturday in the summer of 1988 when I went an 18 mile long run with Dowling and a kid I'd never met before named Mike Bloemker.  At the time I wasn't very happy about this kid tagging along.  Seven years later he would become one of my best friends and he now is the head track and field coach at Johnson County Community College.

Besides the long runs I became involved with Dowling's outstanding high school training program.  I discovered what it took to build a high school runner into a state champion.  Dowling and later Bloemker, had dozens of them.  The high school program led me to another great friend, Chris Ronan, a multiple state champion who would later compete for the University of Kansas.

When Tom passed away unexpectedly in 1995, his protege' Bloemker stepped in and while the sense of loss was deep, the high school program rolled along.  The national caliber runners continued to spring from that program including two-time Olympian Amy Cragg.

Health Plus was in the midst of change when Tom died.  The economics of this huge facility simply didn't add up.  It was on its last leg financially by the start of the new millennium.  Bloemker pulled the plug on the now legendary high school program to devote himself full time to his coaching gig at Johnson County.

Now the famous training ground, called Stress Plus, by the high school coaches who hated it, is being torn down.  My memories will endure.  The indoor track meets, breaking into the facility on Sundays to run long on the track during violent thunderstorms, the numerous sexual escapades inside the facility that were shared among the boys while out on those runs and even that precious black and green Health Plus singlet, are stuck in my mind and buried deep in my heart.
Posted by Rink's Ramblings at 12:46 PM