And Then There Was Gene

2016 has been an unsettling year.  So many celebrity deaths, a handful of which have reached down into the core of the American soul of popular culture.  Prince, Pat Summit, David Bowie, Muhammed Ali, Morley Safer, Gary Shandling, and yes, even Nancy Reagan.  Then there was news of Gene Wilder's passing.  It doesn't pack the punch of an Ali, Bowie, Shandling or Prince, but I have the feeling that many people under the age of 40 don't realize just how great he was.

Outside of Willy Wonka and the Chocolate Factory, I have a sneaking suspicion that the Gen X'ers and Millennials don't have a clue about this curly haired comedic genius.  I remember the first movie I ever went to in which Wilder had a leading role.  It was 1974.  Barney McCoy had regaled members of the track team about a new movie he had seen, "Blazing Saddles."  Barney's description of the fart scene had us rolling.

So off I went not knowing a thing about Wilder or the genius behind this great movie, Mel Brooks.  Wilder was this sophisticated, alcoholic gun fighter, playing a buddy to a black sheriff ,Cleavon Little.  The chemistry was stunning and it laid the path for future black/white buddy films including a few that Wilder would star in with the legendary Richard Pryor, "Silver Streak" being the most memorable of their collaborations. 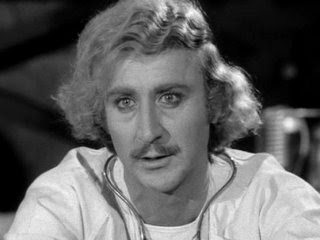 Yet it is two other Wilder/Brooks movies that will stand the test of time.  I didn't see "The Producers" until more than a decade after its release.  Gene Wilder made me uncomfortable.  From that sprung great comedy.  Every time I see that movie, it only gets better.

The greatest movie he ever starred in he co-wrote with Brooks.  If there ever is a movie starring Gene Wilder that you should see it is "Young Frankenstein."  The cast is brilliant and the writing was hilarious.  But it is a song and dance routine that captured the film's essence.  The young doctor tap dancing with the Monster to "Putting on the Ritz" is a classic piece of American comedy.

I can't wait for Thursday night's tribute to Wilder on TMC.  Let the hilarity ensue.
Posted by Rink's Ramblings at 10:06 AM