I love high school distance running.  If you follow the sport at all you're well aware that this has been an exceptional year across the United States for fast times.  Two boys have already broken 4 minutes in the mile, Drew Hunter and Michael Slagowski have both dipped under the magical barrier and another Austin Tamango is just a tick above that mark.

But that's not the point of this bit of writing, I want to revisit a subject I touched on about a year ago.  Southwest Florida remains a red hot when it comes to girl's distance running.  The cast of suspects didn't change much from 2015 to 2016 and the competition remains fierce.

The Oliveira sisters continue to make headlines for Evangelical Christian.  Twins Sierra and Moriah will only be in the 9th grade when the 2017 season rolls around.  The two finally laid claim to their first individual state titles this spring, Sierra in the 800 and Moriah in the 400.  But if you think of Moriah as just a sprinter think again because she runs the 800 just as well.

Sierra runs in the 2:15 range with Moriah just a tick or two slower.  My guess is their futures lie in the 1500/mile.  They've both got wonderful speed but neither is dazzling fast.  Their potential is mind blowing.

Easterly from North Fort Myers was the emerging star over the last year.  She backed up a strong cross country season by handing Gear a rare defeat at the county track and field championships over 3200 meters.  Another year of mileage could put Kayla in the sub-11 minute club along with Gear. 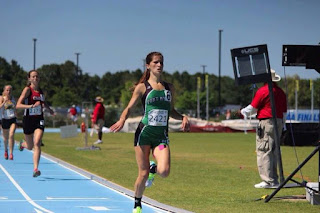 Fort Myers High senior to be Krissy Gear remains the class of the county.  She extended her range to the 3200 where she followed up her 1600 meter state title by running for gold over the longer distance in 10:50.55.  The fact that Gear can also run 2:15 for the 800 tells me that next spring could be a history making one.  If she stays healthy a 4:45 1600 and 10:30 3200 are not out of the question.
That would put her among the national elite.