Get ready for an Olympic disaster.  I hope I'm wrong.  But all signs point to Rio being a complete abomination.  Yes, the same things were written before the Beijing Games of 2012.  But there's a big difference between China and Brazil.  Brazil is broke.

I must admit, I was shocked that the World Cup went off a lot better than I ever thought it would in Brazil.  But the fallout is still being felt.  Massive stadiums were built and the country can't economically support many of them.

I'm not even going to play the Zika card.  I think the bigger problem is all of the water reliant Olympic sports, sailing, rowing, kayaking, all of those athletes will be competing in unbelievably polluted waters.  I wouldn't want to be a triathlete competing in any swim in that country right now.  But athletes who dream of Olympic glory will risk almost anything.

Now the biggest scandal is the drug scandal that has enveloped the sport.  Kenya's drug testing program can't pass muster.  Russia is still on suspension.  My guts tell me if WADA had the guts to take a hard look Ethiopia, Jamaica or Turkey I'm guessing the list would grow.

The worst of it is the International Olympic Committee seems intent on ignoring it all.  Zika, not a problem.  They know banning Russia weakens banner sports like gymnastics and track and field.  Kicking out the Kenyans while cause for celebration for Ethiopia, will have repercussions across the 3rd world. 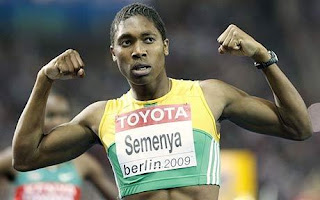 Then there's the 141 pound 800 meter runner in the room.  Caster Semenya is going to make a mockery of women's track and field.  Biologically, she is a man.  The IAAF and IOC refused to deal with this festering issue head on when it first surfaced in 800 when Semenya burst on the world scene running like no other woman in the world.

Last year the Court of Sports Arbitration ruled that Semenya no longer had to take estrogen to level the playing field with women.  Last month Semenya swept through South Africa's championships winning the 400, 800 and 1500 with ease.  The drug testing and gender fiasco threatens to make the track and field competition in Rio a joke.

The fuse has been lit and doing a slow burn to August when the Rio Games take center stage.  Mark my words, Rio could mark the end of the Olympic movement as we know it.
Posted by Rink's Ramblings at 9:41 PM