A promising miler made history 50 years ago.  Jim Ryun ran a world record in the 880 on June 10, 1966 in Terre Haute, Indiana.  The world of track and field was anxiously waiting on Ryun to break the world record in the mile, but sometimes things don't happen the way you would expect. 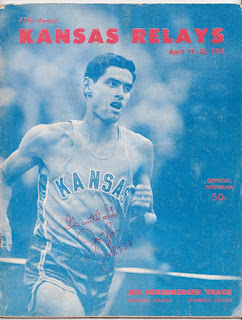 Ryun traveled with his University of Kansas team to compete at the now defunct USTFF outdoor championships.  Only some grainy 8 mm film exists of the record run.  It shows the college sophomore destroying the field winning by more than 30 yards.  Ryun didn't expect the record, 1:44.9.

Coach Bob Timmons said he had no idea what his 19-year-old prodigy was capable of doing at the distance.  In a conversation with the great coach two decades ago he told me the race in Terre Haute came with a lot of criticism.  Reporters were questioning Timmons why he was running Ryun in the 880 when it was obvious his runner's destiny was in the mile.  Timmie told me he just wanted to see what Jim could do.

The mile world record would come a little more than a month later in Berkley, California.  Ryun would break Michael Jazy's record running 3:51.3, a mark he would lower by two-tenths of a second the following year.

Tonight, on this 50th anniversary in ideal conditions in Eugene, Oregon another 19-year-old finally took the last of the standing records held by the great Jayhawk miler.  Texas A&M freshman Donovan Brazier ran an astounding 1:43.55 at historic Hayward Field to take down the ancient mark.  Needless to say, Brazier's potential is amazing.  In this age of instant reaction Ryun quickly congratulated Brazier over Twitter.

Ryun cast his shadow in the record book for 50 years.  He still stands as the greatest miler in American history with two world records in the mile, one at 1500 meters along with an Olympic silver medal at that distance.   Needless to say, he still holds the school records at the University of Kansas in the 800, 1500, mile, 5000 as well as a couple of relays.