The IAAF, track and field's world governing body, said Russia should be barred from the 2016 Rio Olympics.  A new report from WADA, the world's doping organization, showed that systematic doping is ingrained across the board in sports in Russia.  So now the ball, so to speak, is in the hands of the International Olympic Committee.

The IOC can decide to ignore the indiscriminate cheating and allow Russian track and field athletes to compete in Rio.  I think that's the right move.  Doping is a worldwide problem.  It's just as out of control in Kenya as it is in Russia and yet it appears Kenya will be allowed to compete in Rio.  I suspect doping is supported in other countries like Turkey, Ethiopia and Jamaica.

What separates Russia from a lot of countries where doping is prevalent is that it appears the government had a hand in supporting efforts to gain the edge that performance enhancing drugs give athletes.  But if the IAAF is alone in a ban on Russian athletes, why should weightlifters, wrestlers and swimmers be allowed to compete?  Those respective governing bodies have remained silent on Russian doping and probably for good reason. 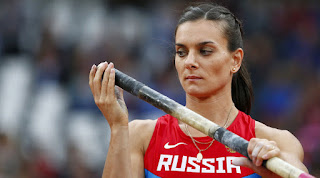 By punishing an entire country you punish the clean athletes competing under its flag.  This leaves me uneasy because it falls into the realm of politics and that has no place in the Olympics.  The boycotts of Moscow and Los Angeles could have derailed the Olympic movement.

The Olympics will implode on its own without the help of the various sporting bodies that rule the individual sports.  The corruption inside the IOC will be its undoing.  It's no longer economically feasible for countries to host the Olympic Games.  Rio has found this out the hard way and I won't be surprised if these games aren't an unmitigated disaster.

It takes a wealthy, economically strong country to host the Olympics.  Even Tokyo, which is hosting the 2020 games, is finding out that the costs may not be worth it anymore.  It's money, not drugs, that will be the undoing of the Olympic ideals.
Posted by Rink's Ramblings at 10:46 AM