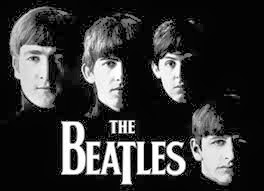 It's all a bit hazy, 50 years later.  I am vaguely aware of the television coverage of their arrival in New York City.  The fan frenzy shown by Walter Cronkite on February 7, 1964 is a faint imprint on my conscientiousness.  But what followed on February 9 will never leave my soul.

It's hard to imagine how The Ed Sullivan Show was must watch television for the vast majority of American families through most of the 1960's.  You were exposed to everything, from great pop music, to opera, to really bad magic acts and jugglers.  It's the great comedians that I remember the most, but on this particular winter night, the vibe in our family living room was completely different.

My older sisters were glued to the television.  My 8-year-old self sensed something big was about to happen because they never seemed to care much, one way or another, about any given performer on Sullivan.  The energy was astounding.  It pulsated through our old black and white television.  The Beatles hit the stage and it was incredible.  There was no lip-synching, there was only straight forward rock and roll.

You have to understand, American rock and roll was in a moribund place.  The Elvis period had died down.  I had been a big Elvis fan, at an early age.  But American rock had faded away.  Popular music seemed to be defined by Bobby Darin or Peter, Paul and Mary.  In fact, folk seemed to be the rising tide among young listeners with The New Christie Minstrels and The Kingston Trio.

The arrival of the Beatles was a course correction.  Whatever Chuck Berry, Little Richard and Buddy Holly had ignited back in the 50's, the Beatles re-lit the flames.  There was no turning back.

After the show I remember my sisters going outside and holding a cold, dark, confab with the girl's who lived next door.  My sisters Dianne and Karen, poured over every moment that the Fab Four had spent on Sullivan's stage with Tammy and Candy Wehling.  It left quite an impression.

We lived in a small town in north-central Kansas.  Hearing a Beatles song on the radio was a rarity.  It was like forbidden fruit.  When we would visit family in Lawrence you could listen to the Kansas City radio stations, which played The Beatles non-stop.

My cousins who lived in KC even got to see The Beatles play Municipal Stadium.  Then they moved to Washington, DC and saw them again and again.  We were stuck in tiny Abilene.  And as the television appearances became rarer, we hoped for any concert movie to catch a glimpse of The Beatles.  It was cruel indeed to be so cut off from such great music.

I remember four years later as Beatlemania had ebbed, riding with my lucky cousin Mike who had seen the Fab Four in concert.  We were in his new Ford Mustang tooling along near tiny Enterprise, Kansas.  Mike excitedly described the latest great Beatles tune he had heard called, "Hey Jude."  Then as if by magic it suddenly crackled out of nowhere on the radio and I listened, rapt, shocked by the fact that such a long song, an incredibly poignant song, could get radio airplay.