One of my major gripes for the last 15 years is the reluctance of artists to provide live copies of their concerts to their fans.  The Internet removed any impediment from providing soundboard quality recordings of any band.  And given the spiraling costs of concerts in this day and age, a free soundboard download really should come with the show, but I digress.

I just wanted to praise Bruce Springsteen for finally dialing up the 21st century by offering downloads of his concerts at a reasonable price.  He started the practice a couple of weeks ago when the Boss launched his first ever tour of South Africa.  For $9.99 you can get a download of the concert through the soundboard that's been sweeten to the extent that it can be over the course of a day or so. 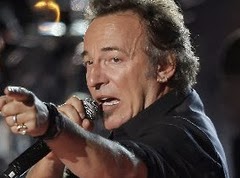 I've already downloaded a couple of shows, one from South Africa and one from his current swing through Australia and I must say, the results are satisfying.  You get the whole concert, complete with mistakes.  In the South Africa show Bruce's microphone cuts out after the first verse of "The Ghost of Tom Joad" and for a minute or so the band just vamps until the mic gets replaced.  Bruce's vocals could be mixed better, but I think a lot of the sound issues has to do the venue as much as the efforts to "fix" the soundboard recordings.

Now the challenge has been thrown down.  Bob Dylan has been touring non-stop since the late 1980's.  He's released a few nuggets from his live shows during that period, but never an entire concert.  You can find an endless supply of bootlegs and I have some pretty good ones, but nothing beats a soundboard recording.  Are you listening Bob?  And are you listening Neil Young?

The Grateful Dead realized it years ago.  They started allowing tapers into their concerts in the 70's and it took off in the 80's.  You can download great shows from these tapers for free at archive.org.  You can even listen to soundboard recordings of the Dead, but you can't download them.  That decision to give it away, was in large part a brilliant marketing idea, because when the taping started, the legion of Dead fans mushroomed.  By the mid-80's every show was sold out.

I'm not holding my breath.  Yet with cash from the sale of recordings dwindling, even rich as God artists like Dylan and Young can't be so stupid as to turn away from a cash cow like concert downloads.  You can bet they're watching Springsteen's efforts with great interest.
Posted by Rink's Ramblings at 4:11 PM