40 years ago today Neil Young released a live album that to this day is misunderstood and at the time was widely panned.  From the moment I dropped the needle on the title track "Time Fades Away" and heard the jangly piano I was in love with the album.  Yes, the recording is a patch work mess of a boozed up, stoned out Neil, but it's as vibrant as anything he's ever recorded. 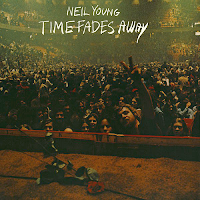 "Time Fades Away" is the only album in Neil's vast catalogue not available on CD or Blu-Ray.  He says it's because it doesn't sound right on CD.  Everyone knows that the disastrous tour that produced the record is an embarrassment to Young.  He went out on the road with a bad back and a huge pall hanging over him after the death of Crazy Horse guitarist Danny Whitten due to a drug overdose.

The album is part of Neil's legendary "ditch" trilogy.  The incredibly dark album that followed, "Tonight's the Night" and almost apocalyptic "On the Beach."  Remarkably in the midst of all of this gloom Young made the never released "Homegrown" which showed rays of light.  The few tunes that have surfaced from "Homegrown" over the years on other albums bare that out.

If you search YouTube you can find "Time Fades Away" available for a listen.  It's worth the 37 minutes or so to catch an out of control Neil Young.  The angst of the biographical song, Don't Be Denied makes it worth the listen alone.  Hopefully TFA will surface when Neil gets around to releasing his next batch of archives.
Posted by Rink's Ramblings at 4:18 PM