I cringed when I saw the news.  Lou Reed, dead at 71.  It was if someone came up to me and told me that you can never be a teenage and, you can never love rock and roll music.  Lou Reed was an important figure in evolution of rock and roll.  I write this, even though I only own a handful of his albums.

Yet, I dare you to find anything better on a live album than the opening guitar riffs on Reed's "Rock 'n' Roll Animal" which came out in 1974.  Dick Wagner and Steve Hunter wail on each other as they ramp up to the classic Reed ode' to heroin, "Sweet Jane."  That 90 seconds or so of blazing guitars would pretty much capture the best of 70's rock and roll to me.  The only thing that I loved more at that time was Eric Clapton's "Layla."  It's hard to compete with Eric and Duane Allman.

I never enveloped myself in Reed's early work with The Velvet Underground.  His passing may require that I spend a little coin and download their groundbreaking debut album.  The critics will talk about that and his second solo album "Transformer" as some of his most important work. 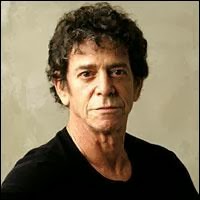 I would challenge you to download "New York" and give it a listen.  One listen will tell you what a great songwriter he was.  Lou Reed may not have generated the volumes of work of Bob Dylan, Bruce Springsteen, or Neil Young, but he certainly merits the comparison when it comes to his best work.  He was no slouch.

I never saw him live.  The closest that I came to it was in 1992 when U2 on their Zoo TV tour.  It was the best rock and roll show I ever saw.  When Bono launched into "Satellite of Love" and Lou Reed flickered onto big screen to join him in a video duet I gasped.  It was just an amazing touch to an overwhelming visual spectacular that captured the music.  Even Lou Reed would have liked it, I think.
Posted by Rink's Ramblings at 6:12 PM