Long ago I professed my love of Sandy Koufax.  The tall Dodger lefthander is why I fell in love with baseball.  But it was a nasty righthander that sealed the deal for me when it came to a game that was still America's past time in 1965. 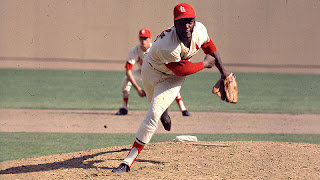 Bob Gibson glowered at hitters.  He willed a team that honestly wasn't filled with stars, to two world titles.  It probably should have been three or four (yes the 63 Cards should have made it to October) but two is pretty damn good.  Gibson dominated hitters with an overpowering fastball.  Gibson first came to national prominence when he willed his Cardinals to a World Series victory by winning game 7 on short rest over an aging New York Yankees squad.

He led the Cardinals to another world title in 1967 over the Red Sox despite suffering a broken leg mid-season.  The Redbirds should have gone back to back in 68 against the Tigers but Mickey Lolich out dueled Gibby in a memorable game 7.

Gibson had ten straight years where he was just a complete beast on the mounds.  He ended his career with 251 wins and 7 more in the World Series.  I remember reading his biography as a kid and marveled at the fact that he was a standout college basketball star at Creighton.  I even remember a commercial he did for where he blasted a fastball at a pane of glass that was shatter proof.  Bob Gibson is the greatest righthander to ever pitch for the Cardinals and that's saying a lot for a team that had Dizzy Dean and Grover Cleveland Alexander.

Gibson's 1968 season is without a doubt one of the five greatest in baseball history.  Granted, pitchers had the upper hand that season, but Gibson's stellar 1.12 earned run average that year will never be approached again by a starting pitcher with more than 200 innings, never.

The reason I started this particular missive is there was a shot of Bob Gibson in the Cardinals' dugout tonight the telecast of their game against the Dodgers.  I was shocked by what I saw.  Gibson looked 45 to 50 at best.  He's  approaching 78.  I still think he could get guys out in the big leagues.  He was certainly one of my heroes as a boy growing up in small town Kansas and still is.
Posted by Rink's Ramblings at 8:55 PM