The Greatness of The Grateful Dead

Stephen Stills once called The Grateful Dead the world's greatest garage band.  Stills is right in a lot of ways, but what he fails to note or refused to consider was something that most great rock and roll bands cannot do, play a half a dozen or so different styles.  The Dead could give you country, the blues, psychedelic, blue grass and some pretty amazing covers of some of the best songs written from greats like Hank Williams to Bob Dylan.

I was listening to "So Many Roads" on my iPod while out on a run tonight that was nearly strafed by lightning.  I have had the recordings for a long time but had not really given them a good listen as The Czarina really doesn't share my love of Jerry and the boys and my stereo is in storage.  Don't get me started.  As the music turned to this series of live recordings from early 90's, I began to think back how The Grateful Dead had morphed through its 30 years of existence.

Fans revel in the life experience of The Grateful Dead.  That's largely because you could see them five times in the course of a week and hear more than 100 different songs.  Their repertoire was endless.  The live experience could be a real disappointment depending on whether the band was in shape to play or often from the unreliable mix from Dan Healy, who was finally jettisoned by the Dead about a year before Garcia's death.

The Dead could sound amazing.  Out of the mere 16 shows I saw 4 were incredible, 4 were very good, and the rest, very uneven.  The band could sound amazingly thin and the loss of Brent Mydland showed that when I saw them in the early 90's.  Even with Bruce Hornsby sitting in with them, he couldn't and Vince Welnick couldn't deliver the depth and texture that Mydland did.  Although I will admit, some of the shows with Hornsby are incredible.

The band's best period was probably the two years before Mydland killed himself.  Some of the shows were mind blowing and Mydland was showing a confidence in having been with the band for the better part of a decade that was lacking in the late 70's and early 80's.  You can hear a lot of the soundboard and audience recordings from that period at archive.org.

The best studio album without a doubt is "American Beauty," recorded in 1970.  It is a great collection of songs that were delicately produced.  That album along with its predecessor "Workingman's Dead," show what they could do when they really put their collective hearts and souls into their studio work.  Right after those albums the band did some of its best live performances.  Listen to the full volumes of Europe 72 and you can begin to understand the magic that Pigpen brought to the band.  The band was tight and reveled in the new music that had created in the early 70's.

I didn't catch the band live until 1977 and even then the live shows were still very good.  Still, when you listen to some of the live recordings a year later you could hear The Grateful Dead degenerating on stage.  Keith Godchaux's keyboard work was ordinary and his wife Donna's harmonies were pitchy and downright awful.  It's no wonder they were fired. 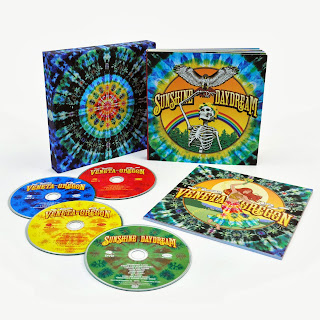 But wander back to when it was all new for Keith and Donna Jean in 1972.  Pigpen dying from liver disease was no longer a force.  The extended releases of the Europe 72 are mind-boggling and yes Pigpen showed glimpses of what used to be.  But it's a the long awaited release in the last week of a show shot in a field outside of Springfield, Oregon that simply amazes.

It's called "Sunshine Daydream," and if you want to invest in the three disc set along with a movie shot of this incredible concert, it's worth it.  Still, save the money, download the digital versions and give it a serious listen.  Jerry's playing is marvelous, Bob is driving force on rthym guitar, Phil is running up and down the bass like a wild man and his harmonies on songs like "Jack Straw" are a thing of beauty and finally, this band simply sounds tighter and better when Bill Kreutzmann was the only drummer.  I'm sorry Mickey, but it gets ragged sometimes when the two of you played.

Buy it, revel in it, and remember, this tour de force recorded more than 40 years ago sounds just as vital and just as important in 2013 as it did to the 20,000 or so hippies who gathered in the sweltering August heat to smoke pot, dance naked and let it all hang out with the good ole' Grateful Dead.

Posted by Rink's Ramblings at 5:54 PM