Running the Boston Marathon is a unique experience.  Most marathons are rather lonely affairs, even in large cities, where crowds are generally sparse, at least until you hit the finish line.  Not Boston, it's a party for the ages.

I've run it only once and then on a whim.  I had qualified a half dozen times or so through the 70's and 80's.  I thought about it, knew I wanted to do it, but it just didn't seem to be a priority.  I remember my coach Tom Dowling telling stories about running Boston.  Boston is a suckers race.  The first 10 miles are lightning fast.  It is deceptively downhill and takes a toll on your quads without you realizing it.

Then after 15 miles or so the climb begins to the famed Newton Hills, Heartbreak Hill, before the gentle glide into downtown Boston.  The problem is that after all that downhill and the climb up Heartbreak often times your quads are shot.  If you haven't trained for the hills you pay a terrible price over the last 6 miles or so.

Finally in 1994 my buddy Steve Riley got into my ear.  "Come with me and run Boston," Steve said.  I hadn't run a decent marathon in three years and was woefully out of shape.  I agreed to join Steve in February to run the St. Louis Olympiad Marathon in an effort to get a qualifier.  This was when Boston still held tight to its qualifying standards, before the field was swelled with charity runners and folks who got in with special exemptions.

It was brutally cold in St. Louis the morning of the race.  Add to that the course served up several brutal hills.  Steve ran with me, carefully guiding me along.  I got to 13 miles in good shape, right on 3 hour pace, well under the 3:15 I needed to qualify.  Steve took off and I slowly came apart.  By 19 miles I was struggling.  I was now stumbling along at 7:30 per mile pace but I managed to hold it together and ran under 3:14 and got my qualifier.  I also got pneumonia from running in the brutal cold.

I had two months to get ready for the race in April.  I trained, but not nearly enough.  I was served by my youth, being a mere 38, at the time.  I stayed with my friend Gary Welsh who lived a mile from the course in Newton.  I went for a run the Friday before the race and went to the hills and thought, what's the big deal? 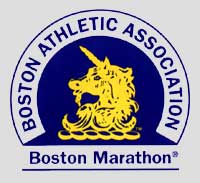 I also went because Coach Dowling was running that year.  I never found him at the start.  But I ran into a half dozen or so other running friends I had picked up through the years.  It was like a big reunion.  The hard part was waiting at the start line to get going.  I had to pee like all get out by the time the gun went off.  I held off, hoping the urge would go away, until 10 miles where I hit a port-a-potty.  Unfortunately the pit stop cost me my rhythm and while I was on 3 hour pace up to the halfway point I knew I needed to save myself for the hills.

Running through Wellsley was amazing.  The hairs on my arm stood up as the co-eds screamed their hearts out.  I looked on amazed as one man after another stopped for quick kisses from the girls lining the course.  Heartbreak came and I passed dozens and dozens of tiring runners.  I struggled on to the finish line clocking a 3:12.  Steve and the Sand Rat gang was there and we reveled in running the world's greatest marathon.

9 years later the Czarina and I returned to Boston.  She'd wanted to run it and we both qualified.  I got injured in the month leading up to the race.  The Czarina experienced the great race on a super hot day.  I watched the finishers from a restaurant overlooking Boylston with my sister Mary and my friend Gary.  We were about a block up from the actual finish.  The Czarina ran great given the conditions and I had a blast watching the great runners and not so great coming down Bolyston.

You couldn't help but notice the security in the post 9/11 world.  Getting access to the prime seating area was just about impossible.  Remarkably by the time the Czarina finished, just over 4 hours, I easily made my way down to and into the finish chute.  I had my number with me so they  let me into the area.

Boston is a very different race than it was in 2003.  About 10-thousand more runners sign up for it now than they did just a decade ago.  The field is so large it goes off in waves.  And I think that's why the terrorists who launched this attack did so without getting caught right away.  The explosions came almost 5 hours after the elite men started along with the bulk of the field.  The first place man had finished almost 3 hours before the blasts hit.

My guess the smaller crowds and with it a less intense amount of security allowed those responsible to strike.  I know if I could, I would run Boston next year in support of the city and those who were killed and injured.  It's one of the world's great sporting events.  It is a sad day indeed.
Posted by Rink's Ramblings at 5:56 PM